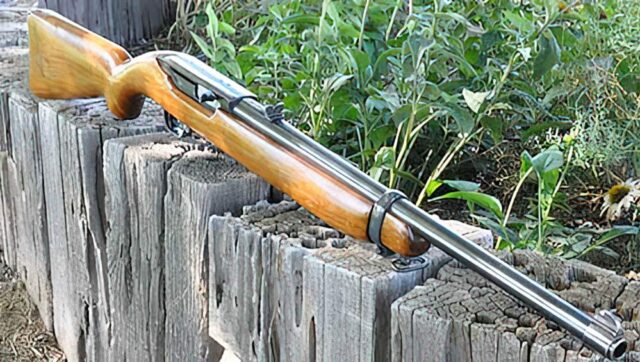 Here’s a trivia question: What was the first Ruger rifle? Most folks will guess the 10-22, their wildly popular .22 caliber semi-automatic. While the rifle that came first looks like a 10-22 it’s actually a much more powerful .44 Magnum. Designed in 1959, the .44 Magnum was initially called the Deerstalker. That name was dropped after Ithaca pointed out they had a shotgun with that name so the new Ruger became the Ruger Carbine, the .44 Magnum, or more often, the Ruger .44 Carbine.

In 1959 when Bill Ruger began planning his carbine the Remington .44 Magnum cartridge had been around for a little over three years with both Ruger and Smith & Wesson producing handguns in 1956. Smith’s offering was the legendary Model 29 double action revolver, still decades away from being immortalized by Dirty Harry’s pronouncement that it was the “world’s most powerful handgun and it will blow your head clean off.” The Ruger Super Blackhawk first appeared as a 7.5 inch barreled larger version of Ruger’s single action Blackhawk and quickly gained fame as being stronger than the M29 and more able to handle a steady diet of the hottest .44 Magnum commercial and reloaded ammunition. 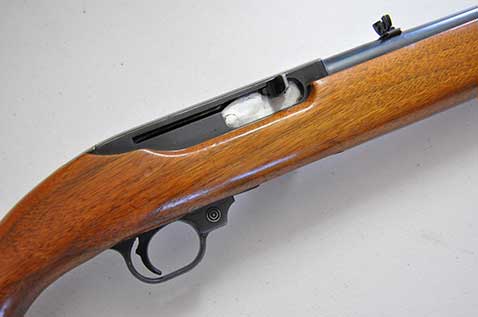 Speaking of ammunition, the early Remington .44 Magnum loads were hot, really hot. Whether in the 6.5 inch barreled M29 or the Super Blackhawk these loads managed to get a 240 grain bullet going at about 1500 feet per second. Shooting them in either handgun was an invigorating experience! Elmer Keith was the daddy of the .44 Magnum and he had his own hand rolled version of these loads. Using a bullet of his design, the classic Lyman 429421, a 255 grain hard cast flat tip lead semi-wadcutter, Keith propelled these big bullets behind a hefty 22 grain charge of Hercules 2400 powder in .44 Magnum cases and 18 grains of the same powder when loaded in .44 Special cases. Any way you look at it, whether commercial ammunition or Keith’s loads, the .44 Magnum came out of the gate running hard.

Having immediately grasped the importance of the .44 Magnum, is it any wonder that genius gun designer Bill Ruger would next turn his attention to the production of a rifle capable of firing this new round? In his typical, thinking outside the box way, Ruger decided upon a short stroke gas piston semi-automatic design fed from a hidden tubular magazine. To ensure it was strong enough to handle the big magnum, Ruger had the receiver carved out of a block of ordnance grade steel, a timely and expensive process but one guaranteed to provide the needed strength. The overall look of the carbine was reminiscent of the .30 caliber M1 Carbine that a couple of generations of American soldiers were familiar with from their service in WWII and Korea. Was this an intentional, and clever, marketing ploy on Ruger’s part? I wonder. Anyway, Ruger introduced his carbine in 1961, producing only one sample, serial number 1. Things picked up right away in 1962, with some 65,000 carbines going out the door and the carbine continued in production until 1985 when it was discontinued due to production costs. And therein lies another core principle of Sturm, Ruger & Co.; providing value to the customer as opposed to the usual practice of jacking up prices.

Being a fan of .44s I always wanted one of the Ruger .44 Carbines. Lusting proved unproductive and by the time I finally got myself in a position to buy one the guns were out of production. My interest in the carbine came and went as other pursuits like staying alive on the border captured my attention and I never got around to finding one. I happened to be cruising a used gun auction house with a friend earlier this year and came across two. One carbine was in near-new condition and the price reflected that, but the other, in good but obviously used condition, was reasonably priced and I jumped on it. Ruger has a very good website and one of the features I like is you can look up serial numbers and production figures and read or download instruction manuals – even for guns long out of production. Looking up my carbine I found it was made in late 1962, the first year of full production. My carbine has the standard stock and 18.5 inch barrel and has sling swivels and a white insert (bone?) in the front sight. Weighing only 6 pounds, it is short handy and quick to shoulder. The trigger is crisp and breaks at about 6.5 pounds. Field stripping and cleaning the carbine is a bit tricky. It’s covered in the manual and I found several helpful online videos.

After swabbing out the bore and cleaning out some old sludge and gunk in the action I hustled off to Gunsite. Because the carbine feeds from a tubular magazine, much like a typical lever action rifle, flat nosed bullets are recommended. With pointy bullets there is always the potential for the point of one cartridge striking the primer of another and setting off a magazine detonation – something to be avoided. The original manual recommends, and a friend at Ruger told

me, that the carbine does best with 240 grain jacketed soft point ammunition. Lead bullet loads aren’t recommended because the lead can clog the gas port, so, even though I would have liked to try some of Elmer’s loads I stuck to the two jacketed factory .44 Magnum loads I have on hand. The first, by Sellier & Bellot is a 240 grain jacketed soft point and it proved unreliable. Ooops. Maybe my gun was broken, thought I, which would explain why someone sold it. The other load I have is Hornady’s 225 grain FTX LEVERevolution, ammunition specifically designed for tubular feed guns. While using a pointy bullet, the polymer flex tip (FTX) prevents magazine detonations. This ammo wasn’t even a gleam in Steve Hornady’s eye in 1961 but it’s ideally suited to the old carbine. Fortunately, it runs great in my gun, hits where it’s aimed out to 100 yards and is pleasant to shoot. Perfect! The listed velocity of this ammo is 1410 feet per second (fps) out of a 7 ½” barreled revolver. I chronographed it and got an average velocity of just over 2,000 fps in the carbine. That calculates to an increase in muzzle energy from 993 foot/pounds to 2049, a substantial gain. While the .44 Magnum is plenty powerful in a handgun shooting it from a carbine length barrel ups the game considerably.

The gun shoots fine with the open sights but I wanted to give it a try with an optic, perhaps the excellent Sig Sauer Romeo 5 red dot sight. Unfortunately, I can’t find a Picatinny rail made to fit the receiver but scouring the Brownells catalog I discovered a set of Weaver scope mounts made for the carbine. I installed the forward mount and clamped the Romeo 5 to it, and although it will likely work it looks wrong. Maybe the way to go for an optic would be one of Leupold’s low power variable Firedot scopes. Then again, shooting the carbine with the iron sights is accurate, quick and easy so maybe I should just leave it alone and be happy shooting it the way Bill Ruger had in mind. 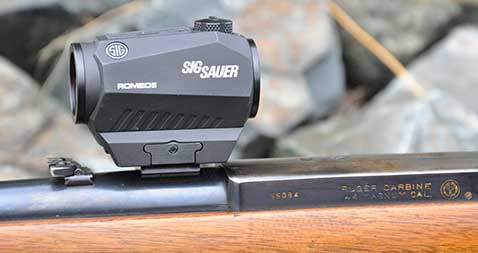 Is there a future for the Ruger .44 carbine? Well, there was another version based on the Mini-14 called the Deerfield. It used a rotary magazine and was manufactured between 2000 and 2006. When I posted pictures of my carbine on Facebook it generated a lot of discussion and it’s clear folks would like to see Ruger resurrect it, perhaps with the rotary magazine of the Deerfield. A friend at Ruger tells me there is an ongoing debate within the company so maybe you should voice your opinion if you would like to see a new .44 carbine. Go to Ruger’s website, click on Tell The CEO and send Chris Killoy a note – he reads all of them.