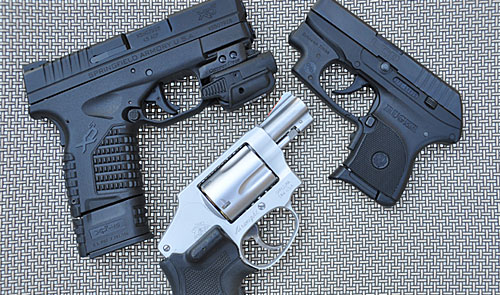 As the sun dropped into the Pacific twilight descended on the border. The man had one hand behind his back. His jaw was set in determination and he was staring into my eyes as he came at me in a crouch. A little while earlier an informant had told me this guy had a large knife concealed in the small of his back and had announced his intention to kill me. As I drew my pistol to low ready I said, “Stop, don’t move”, in Spanish. He kept coming. I pointed my Beretta 96D pistol at the center of his chest and repeated my command. He kept coming. As I started the double action trigger press I gripped the pistol just a bit tighter and the Crimson Trace Lasergrip came on. My focus went from the front sight to the red dot dancing and blazing on his chest. I thought, with some detachment, that the laser showed up really well in this light against his grey sweatshirt. I decided, if he takes one more step or pulls the knife, I’m going to drop him. I suppose you could say it was the moment of truth.

To me, lasers on defensive pistols are an exercise in added value; you gain a lot and give up nothing. Especially, on small pocket pistols with minimal sights, lasers are essential accessories. Lasers are not a substitute for solid training. When it comes to firearms training there is no free lunch and there are no magic shortcuts. If you want to be able to defend yourself and your loved ones with a pistol you have to put in the time, effort and practice necessary. Beginning shooters should learn the fundamentals of trigger and sights before learning to shoot with a laser. Once the marksmanship skills have been learned a laser can aid in training by providing visual feedback. For example, if you are jerking the trigger you will see the dot jump low and to the side and if you are pressing the trigger smoothly the dot should remain relatively still.

Keeping the laser dot still is an issue that needs to be understood. If you’re shooting your pistol and focusing on the front sight you will notice very little apparent motion of the sights on the target and you should disregard this small amount of motion. Why? Because it’s impossible to keep the pistol from moving. But if you’re looking at the target, instead of the front sight, it will look like the sights are swinging all over the place and this will generally cause you to jump on the trigger in the hope of causing the gun to fire as the sights pass over your aiming point. If you’re looking at the laser dot it’s going to seem to be jumping around your intended target. A firm grip and strong shooting stance will help steady it but the only cure is to accept some movement of the dot and control the trigger. Remember, when in a fight you don’t need a perfect shot, just a good one.

How about speed? Do lasers slow you down? Yes, if you waste time trying to keep the dot from moving. In an up-close-and-personal gunfight you need to see the front sight, or the laser dot, somewhere in the center of the threat for that fraction of a second it takes you to confirm alignment of the pistol before firing. Waiting for a perfect sight picture, or for the laser dot to stop moving, will only slow you down and the one thing you can’t afford to give up is time. What if you’re in an awkward position, maybe knocked down, or concealed behind cover, that makes it difficult or impossible to see your front sight? What if there’s enough light to identify the threat but not enough to see the sights? In my experience, lasers can help you make a shot you might otherwise never make with conventional sights.

A couple of years ago I conducted an experiment at Gunsite with a group of writers who were being introduced to the Smith & Wesson M&P 45 pistol. We ran a night shoot that included paper targets, individual and multiple steel targets and live fire simulators using night sights, hand held lights, lasers and weapon mounted lights. Overwhelmingly, the writers felt they were faster and more accurate, under all conditions, with a laser and white light mounted on the pistol. This must have impressed me, as my bedroom pistol is an M&P 45 equipped with a Crimson Trace Lasergrip and Surefire X300 weapon light.

Are lasers reliable, and what do you do if the batteries die? Well, that’s why you have sights and learned to use them first. As to reliability, even my antique first laser never failed me in the years I carried it on duty. Made by Laser Devices, this laser was big and blocky, attached to the trigger guard of my Glock 19 pistol and had a wire and pressure switch hanging out the side. Purchased in 1992, it still works. Although I’m sure lasers can break, I have had experience with a bunch of them and none have failed. Like your pistol, your flashlight or your other defensive equipment, your lasers should get periodic maintenance and you should replace the batteries regularly instead of waiting for them to run out of juice.

My confrontation with the knife guy on the border turned out well. No, I didn’t shoot him – almost, but not quite. A second before I fired, the assassin glanced down, saw the laser dot on his chest and had a sudden change of heart. I thought it interesting he had been unconcerned with staring down the muzzle of a .40 caliber pistol but gave it up when he saw the red dot. I guess in that final moment he truly understood what was about to happen to him so he hastily retreated into Mexico. After I holstered and looked around I saw our public information officer was nearby escorting a group of respectable looking citizens. Going over to them, I was introduced to a new Federal District Court judge who asked me to explain what he had just witnessed. I told him the story about the knife and he asked me, had I fired, if the bullet would have hit where he saw the red dot? When I said that, yes, it would have, he said, “You should have shot the son of a bitch.” I replied, “Well your honor, if I had known you wanted me to, I would have shot him for you!”

Shooting Gallery: All About Optics 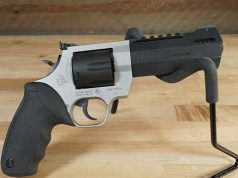 Catching Up on New Products!

Michael Bane - January 26, 2021 1
This week Michael talks about some of the new products announced  during the period of time normally occupied by the SHOT Show.