Jeff Cooper and I were sitting in front of the fireplace in his home, he in his favorite chair and me on the couch to his left. As we sat we un-holstered our pistols and set them down on the end table as a concession to Mrs. Cooper, who didn’t much like pistols tearing or smudging her upholstery. We spoke about 1911 pistol reliability and Jeff said the smaller you make a 1911 the harder it is to get it to work. He offered his opinion that the Commander sized guns were “just right” considering reliability and ease of carrying. Thinking back on that conversation and the many times I saw Jeff at Gunsite, I can’t remember a time he wasn’t wearing a pistol and that pistol was invariably a Commander in a Yaqui slide holster. After many years of carrying, shooting and teaching with 1911s I’ve come to the same conclusion – the Commander is just right and my favorite Commanders are Lightweights.

You wouldn’t think reducing the barrel and slide length by three quarters of an inch and the weight by about three quarters of a pound would make much of a difference, but it does. To me, LW Commanders seem to look better, balance, feel better in the hand and carry more discretely than full size 1911 pistols. While most 5” 1911s weigh around 36 ounces, LW Commanders weigh about 25 ounces. This translates into the LW pistols being easier to carry and (perhaps) quicker to draw and point but a little tougher to shoot well if you’re bothered by recoil. Shooting a LW in .45ACP isn’t painful, like shooting a 12 ounce .357 Magnum revolver, but they do move a little more in recoil. A powerful grip and shooting stance can mitigate this but there’s no doubt the Lightweights jump around more than heavier pistols. 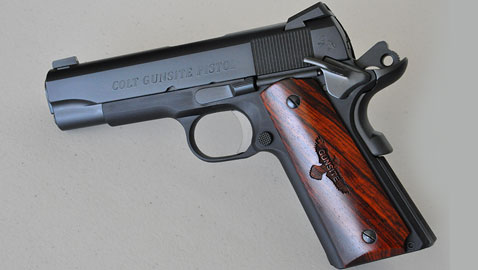 At one time Gunsite was in the custom pistol business but in recent years the school has worked with manufacturers, principally Colt, to make pistols built to Gunsite’s specifications. The latest in this series is the new Colt Gunsite Lightweight Commander. How is the Gunsite pistol different from the standard Colt item? To begin with, the Gunsite pistol uses the Series 70 fire control system, meaning there is no firing pin safety as found in the Series 80 Colts. The Gunsite pistol 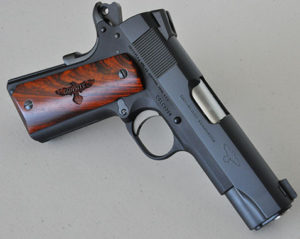 comes with thin, checkered stocks in, I think, rosewood, and a short, solid trigger. Gold Cup style serrations are added to the front strap and the mainspring housing and the front strap is relieved behind the trigger guard for a higher grip. Sights are genuine Novak with a plain black Low-Mount rear and a white dot night sight front. The stainless steel barrel is marked NM, for National Match and I understand these pistols are assembled and fitted by the Colt Custom Shop. Like the standard model, the Gunsite version uses Colt’s new double recoil spring. The Gunsite pistols have a unique serial number prefix, CGLC, standing for Colt Gunsite Lightweight Commander. The left side of the slide is marked “Colt Gunsite Pistol” and includes the Rampant Colt trademark. The right side of the slide is marked Lightweight Commander” followed by the Gunsite Raven trademark. The pistol comes with two 8 round magazines, an instruction manual and the usual government mandated padlock.

According to my postal scale the Gunsite pistol has a bare weight, no magazine, of 27 ounces. Comparing it to my pre-70 Commander, the old pistol weighs 24 ounces, with the slide accounting for a 1 ounce difference and the frame for 2 ounces. The trigger on my Gunsite pistol breaks crisply at just over 5 pounds, with no creep or over travel. It’s a good trigger that would be perfect if it broke at 3.5 to 4 pounds. While the stocks that come with the pistol are very nice I couldn’t resist switching them to a set with the Gunsite Raven logo – because it seemed like the right thing to do with a Gunsite pistol. 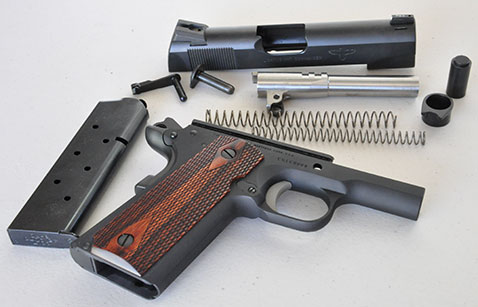 At the range I took the pistol out of the box, loaded the magazines with 230 grain full metal jacket .45ACP ammunition and shot the Dot Torture Drill. This 50 round drill, shot at only 3 yards with no time limit, is indeed tortuous. Fortunately the Gunsite pistol and I were up to the task and I managed to clean Dot Torture. 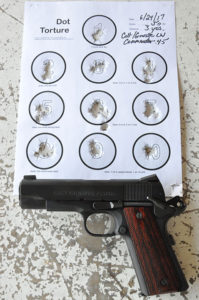 Considering the Gunsite pistol is an optimized defensive pistol I next ran every defensive .45ACP load in the ammo bunker through the pistol in a variety of combative shooting drills. The LW Colt ate this ammunition without complaint. The two loads I have that sometimes choke 1911 pistols are Remington target wadcutters and Federal 185gr. Match hollowpoints, sometimes called the flying ashtray for their huge hollowpoint cavity. Happily, the Gunsite pistol consumed these loads without a hitch.

Next, I asked my friend Rob Leahy at Simply Rugged Holsters to make me a fancy carry rig. Using Mojave Rattlesnake skin inlays from a snake taken at Gunsite, Rob built me a beautiful holster and magazine pouch of his Cuda holster design. Aside from looking terrific, this rig is an extraordinary design for concealed carry. I’ve been wearing it and carrying the Colt Gunsite with nothing more than a baggy t-shirt as a cover garment and it is secure, fast, comfortable and very concealable. This rig, being too pretty to conceal has become my new BBQ/Party Pistol setup. 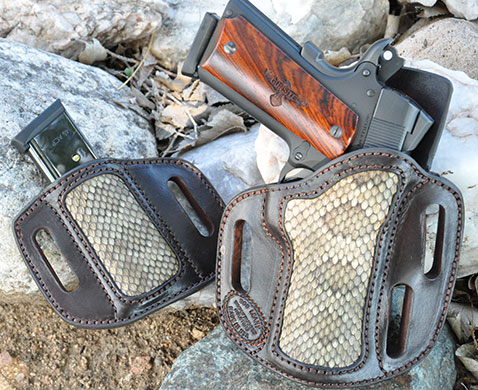 With a retail price about $600 more than the standard Colt model the question becomes, is the Gunsite pistol worth the extra cost? Considering it’s a limited edition instant collectible with some unique features, that’s a perfected defensive pistol, my answer is “Yes.” You’ll have to decide for yourself  – I’ve got mine, serial number 8, the same number as my Border Patrol call sign – and you can get yours by calling the Gunsite Academy ProShop at 928-636-4565. The line starts to the left…