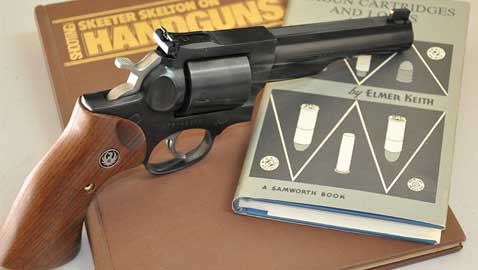 “For those who understand no explanation is necessary; for those who don’t no explanation is possible.” So said gun scribe John Taffin when describing the .44 Special. Folks who like the .44 Special, and I’m one of them, realize it is an amazing pistol round. Exceedingly accurate, available in mild to wild ammunition and capable of doing just about any job you might reasonably ask of a handgun, the .44 Special is indeed special. While some don’t get it, those of us who appreciate fine revolvers and who came of age reading the works of Elmer Keith, Skeeter Skelton, and yes, John Taffin, have a great affinity for this do-all pistol round. 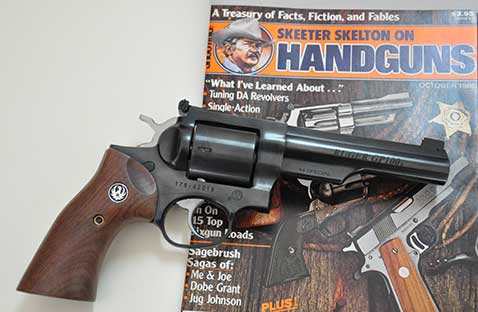 Let’s go back a few years and start with Elmer Keith. A hunter, rancher, cowboy and hand loader, Keith came to believe in the value of big, heavy bullets at moderate to high velocity. After hot loading the .45 Colt and blowing up a couple of Colt Single Action Army revolvers Keith focused his experiments on the .44 Special. He soon found he could get the performance he was after without blowing guns up and his experiments eventually led to the creation of the .44 Magnum. Along the way, Keith designed a bullet and talked Lyman into making molds for it. Cast as a 250-255 grain semi-wadcutter or a 235 grain hollowpoint, Keith proved that his #429421 bullet in the .44s could be relied upon to penetrate and cleanly kill any animal in North America. Keith’s heavy .44 Special load consisted of his bullet atop a 17.5 grain charge of Hercules 2400 powder and his .44 Magnum load launched the same bullet behind 21 grains of 2400. I have loaded and fired thousands of both loads over the years and personally find the 21 grain load unnecessary; you can do anything you might want to do with the 17.5 grain load in either .44 Special or .44 Magnum brass.

By the time Skeeter Skelton became the handgun editor at Shooting Times magazine he had been a Border Patrol Agent, County Sheriff and Customs Special Agent. A true border rat (a term of endearment in my crowd) Skelton hunted, plinked and traded guns down in Mexico as he experimented with Colts, Rugers and Smith and Wessons. Like Keith, Skelton eventually came to the conclusion the .44 Special was the do-all handgun load and advocated for the manufacturers to bring out revolvers in this largely neglected caliber. While approving of Keith’s .44 loads and using them extensively, Skeeter wanted a law enforcement load for the Special and came up with a combination using Keith’s bullet over 7.5 grains of Unique powder for around 900 feet per second. This is an easy shooting .44 load that penetrates and kills way out of proportion to what you might expect. A game warden and hunter I spoke with told me he has seen thousands of animals killed with this load and it will penetrate clear through a large bear. He told me there is no need to look for a heavier or more powerful load; to his mind the “Skeeter load” does it all.

Back to Skeeter, the drum he kept pounding beat out the message that what was needed was a medium frame, 5 shot, double action .44 Special, ideally with a 5 inch barrel and stocks patterned off an old Roper design. Skeeter died without seeing his revolver made but over the past couple of years another .44 Special fanatic by the name of Jason Cloessner at firearms distributors Lipsey’s has taken up Skeeter’s crusade, collaborated with Ruger and made a five shot, five inch, .44 Special based upon the Ruger GP100. With a half lug barrel, unfluted cylinder, wooden stocks very much of the Roper pattern, a white outline rear adjustable sight and a gold bead front sight this new GP100 would surely please Skeeter. While Jason was at it he prevailed upon Ruger to produce this GP in .44 Special, .357 Magnum and .327 Federal.

Weighing 38 ounces unloaded the GP100 I am testing has a crisp single action trigger pull of 5.5 pounds and a smooth double action pull of slightly over 8.5 pounds. This is an excellent trigger for a double action revolver but if you might be tempted to improve it Brownells lists a couple of spring kits in their catalog. Regardless, the revolver is easy to shoot well and I enjoyed a couple of range sessions with it. Not having any Skeeter loads made up in .44 Special cases I prevailed upon Mike McNett, founder of DoubleTap Ammunition to send me a load he makes that’s very close. Using a 240 grain hard cast solid semi-wadcutter at an advertised velocity of 920 feet per second I found it to average 887 feet per second in the five inch tube of the GP. This load is pleasant to shoot but penetrates extremely well; I recently shot it through four feet of ballistic gelatin out of a 4 5/8” inch barreled Ruger Bisley Blackhawk, another Lipsey’s special. While we tested a bunch of ammo that day the only other load to go all the way through the gelatin was the .480 Ruger and it did so with many times the blast and recoil of the .44 Special. If you don’t hand load and want a perfect all-around load for your .44 Special I can’t recommend this DoubleTap ammunition more highly.

I tested two .44 Special loads from Hornady as well. The first, a 180 grain XTP advertised at 1,000 feet per second chronographed an average 948 feet per second. The other, a 165 grain FTX exceeded its advertised velocity of 900 feet per second with a velocity of 1065 feet per second out of the Ruger. Both of these loads are powerful yet mild shooting in the GP. The revolver is light enough to pack easily but has enough heft to shoot comfortably. The Roper style stocks help too, but even so I’m glad I didn’t have any heavy Special loads made up to test. I’m pretty sure the 17.5 grain/2400 load fired in this revolver would make the arthritis in my knuckles scream.

Next, I stopped in to see my friend Rob Leahy at Simply Rugged Holsters and looked over a variety of holsters for the Skeeter Gun. From field rigs to chest rigs and fancy carved holsters, to ones dressed up in exotic hides, Rob can make you anything you might need. Rob is another .44 fanatic, already has a Skeeter GP100 of his own and understands what it takes to pack a powerful revolver in a proper holster.

Lipsey’s and Ruger have done a fine job producing a revolver Skeeter wanted and .44 Special fans have been hoping for. Load it with Skeeter loads if you roll your own or use McNett’s excellent version and be done with it. You’ll have a revolver that will handle anything from hunting to defense. Pack it in one of Rob Leahy’s holsters, carry it everywhere, shoot the heck out of it and you’ll be set. As they say, “Beware the man with one gun, he probably knows how to use it.”