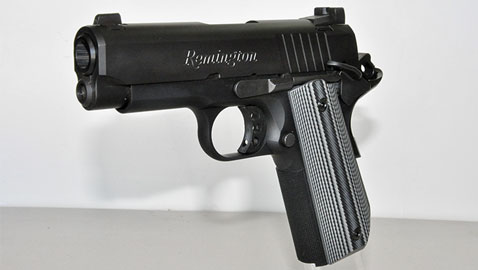 After a hiatus of 90 years Remington got back into the 1911 business in 2010. You see, late in World War I the company was contracted to make 1911 pistols for the U.S. Government but the war ended after about 24,000 pistols were made. Not to be confused with Remington Rand, the typewriter company produced some 900,000 1911A1 pistols for the U.S. Government during World War II.

Back to the matter at hand, when Remington got back into the 1911 business they designated the pistol as the 1911 R1. Starting with a military style 5” barreled pistol, Remington has since produced a number of other variations, including pistols for competition and this latest offering, an Officer’s Model style pistol they call the 1911 R1 Ultralight Executive.

My test sample is a nice looking, full-featured pistol featuring a black on black finish offset by grey/black G10 stocks. The frame is aluminum and features a high cut behind the trigger guard, well executed checkering on the front strap and a smooth, roundedmainspring housing. This is how it should be – the frame should be grippy in front, smooth in back and on pistols with an abbreviated frame the butt end should be rounded to avoid digging into the palm.

The slide, barrel and other critical parts are blackened steel in some sort of meteor proof finish Remington calls PVD. The coned, ramped, 3.5” barrel is said to be Match-Grade. Atop the slide sit a nice set of night sights with small dots in back, a big dot in front and a generous U-notch in the rear. The rear sight feature the stylish sharp hook, said to be for one handed slide racking but more useful for ripping into your hand during malfunction clearances. The slide has large serrations where they belong, on the rear of the slide and none on the front. 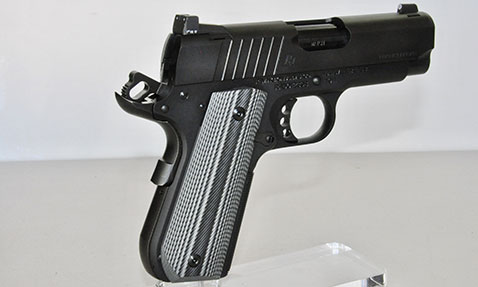 The hammer and trigger are of the skeletonized variety and the trigger pull breaks at a very consistent 3.5 pounds, according to my Lyman electronic trigger gizmo. In fact, the trigger would be a perfect 1911 trigger were it not for the considerable creep. Fortunately, there is no over-travel. The pistol features the usual 1911 safeties of a grip safety, thumb safety, disconnector and the Series 80 style firing pin safety.

The pistol weighs 30 ounces, unloaded with an empty magazine and has a carrying weight of 35 ounces when loaded with 8 rounds of defensive ammunition. That makes it about 6 ounces lighter than a full size, steel 1911 pistol. The coned barrel adds weight to the front of the pistol but also makes this little blaster several ounces heavier than most Lightweight Commanders while carrying one less round of ammunition and being slightly smaller and more concealable.

The pistol comes in a cardboard box with two blackened 7 round magazines, the usual padlock and two rather curious items, those being a barrel bushing wrench and an instruction manual. Because this pistol uses a coned barrel there is no barrel bushing so the wrench is superfluous. The instruction manual is for the standard R1 model and goes through takedown and reassembly, a parts diagram and so on for a pistol with a barrel bushing. Basic function and safety is addressed in the manual and that applies equally to this model as well so I suppose there is some value in it but I wish Remington would take the time to print a model specific manual.

The reason I’m complaining about the manual is because, if you don’t know better, getting this pistol field stripped for cleaning could be a problem. For example, there is a full-length guide rod and when you lock the slide to the rear you will notice a small hole in the guide rod that’s usually associated with capturing the recoil spring for removal. If you fall for this and try sticking a paper clip or bit of wire in the hole you’re going to be very frustrated. As it turns out, takedown is straightforward: After ensuring the magazine is removed, there is no round in the chamber and the pistol is unloaded, pull the slide back until the rounded takedown notch in the slide lines up with the rear of the slide stop. Push the slide stop out from right to left, remove the slide forward off the frame and lift the guide rod and recoil spring out. The barrel is then removed through the front of the slide. Reassembly is, as they say, in reverse order, just make sure the firing pin safety lever on the rear of the slide next to the ejector is down.

I took the little boomer to Gunsite, loaded up two magazines with Remington 230 grain hardball and experienced a failure to feed malfunction on the third round from each magazine. I field stripped the pistol, looked it over (nothing wrong I could see) and lubricated the heck out of it. Next, I fired the Gunsite School Drill from 3 to 15 yards with the same ammunition without a hitch. The sights, as I see through them, are perfectly regulated for a traditional sight picture back to 15 yards. Next, I moved back to 25 yards and discovered the sight picture I needed for center hits was sinking the ball of the front sight to the bottom of the rear sight U notch. Not a problem and consistent hits ensued. 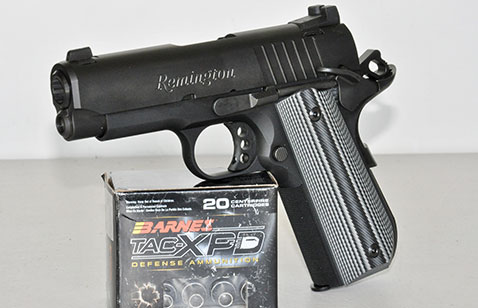 Moving back up to three yards I used the Remington hardball to run through Dot Torture for a perfect score with two failure to feed malfunctions out of the 50 rounds. Switching to defensive ammo I fired at least one magazine each of 8 different loads. Barnes Tac-XPD and some old Cor Bon DPX, both copper hollowpoint designs, were the only loads I fired without at least one malfunction per magazine. During my test, consuming some 125 rounds, I experienced 13 malfunctions. 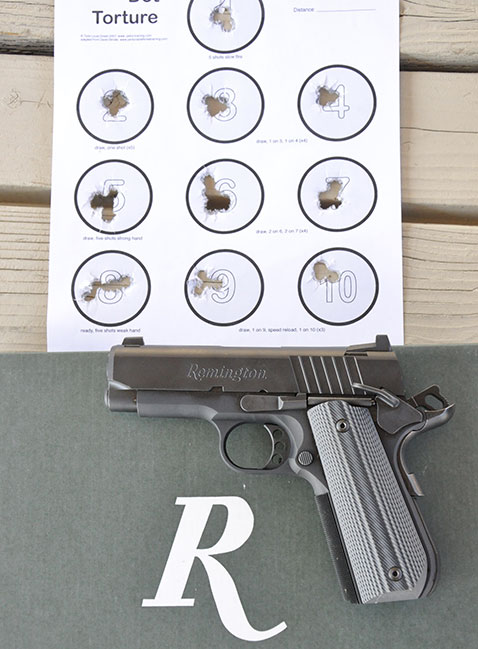 The MSRP on this pistol is $1,250 and that would be a fair price for such a well made, good-looking pistol were it not for the fact it won’t run consistently – at least in my example. It may have something to do with the magazines but I’m suspecting it’s more like an extractor tension issue. In any case, a good gunsmith could fix that and clean up the trigger then this would be a very nice little carry piece. I’m pleased Remington is back in the 1911 business and I think they are on the right track but they have a little ways to go.