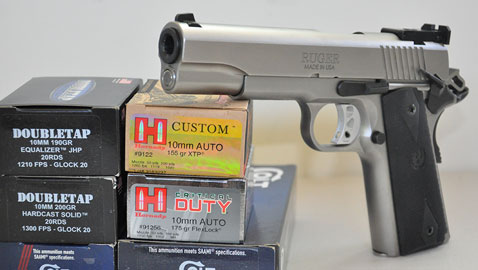 Is anyone surprised Ruger added a 10mm pistol to their growing SR 1911 lineup? It was only a matter of time and that time has come. While fans of the 10mm round rejoice, others may be wondering what the fuss is about so let me explain. Back in the Dark Ages, around 1983, Jeff Cooper proposed a pistol built for his conceptual 10mm pistol round, a combination he hoped to be the next great step forward in defensive pistols and ammunition. Unfortunately, the project was a flop as the Bren Ten pistol failed for a variety of reasons and Norma, the company initially producing the ammunition, souped the round up beyond Cooper’s specifications and turned it into a high pressure, hard to handle pistol round akin to Magnum revolver ammunition.

The 10mm was kept alive when Colt, and later Glock, produced 10mm pistols and other manufacturers came out with ammunition. The next developmental step occurred in 1989 when the FBI adopted a large frame Smith & Wesson pistol in 10mm as a reaction to the perceived failure of the 9mm round in the infamous Miami shootout. This project failed when agents had trouble qualifying with hot ammunition in a pistol that was way too big to be easily concealed. Smith & Wesson came to the rescue with the creation of the .40 S&W round that fit in a 9mm framed pistol and it seemed as though the 10mm was doomed once more.

Today there is some overlap between .40 S&W and 10mm ammunition as the hottest .40 S&W ammo gets pretty close to 10mm ballistics and the lighter 10mm loads are similar to .40 S&W ammunition. So, you might ask, why are there so many folks who consider the 10mm to be the perfect pistol round? The answer lies in the hotter 10mm ammunition. At the top end the round shoots flat, hits hard and is entirely well suited to defensive and hunting purposes. Mike McNett at DoubleTap ammunition has made a business of creating so many different 10mm loadings I’m unable to keep track of them. He has a load for everything, including defense against big bears. Other true believers I know who venture out in bear country carry his ammunition in their pistols, preferring a hard hitting, high capacity auto to a five or six shot revolver. Regardless of your opinions on bear defense, the 10mm is very well thought of by hand gunners. I happened to be testing the 10mm Ruger at a gathering of experienced shooters at the NRA Whittington Center the week the nutcase with a rifle opened up on a group of lawmakers at baseball practice in Alexandria, Virginia. The comment most often heard? “If a few of those Congressmen had one of these they could have easily handled that guy.” 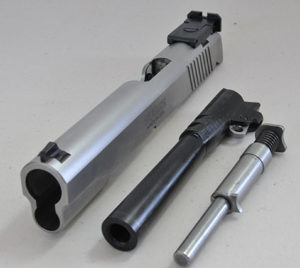 The pistol I have at hand is a full size, 5 inch barreled model that, at first glance, looks very much like the .45ACP SR 1911 Target model with an adjustable rear target sight and serrated black front sight. Looking a little closer you might notice something is missing, that being a barrel bushing. Retracting the slide reveals a coned barrel and guide rod. At the other end, the barrel is ramped to help feeding. Checkered rubber grip panels aren’t very sexy looking but they help with the overall feel and grip of the pistol. Like just about every SR 1911 I’ve handled, my sample has a very good trigger that breaks right at 4 pounds with very little takeup and no over travel. The pistol ships with two, 9 round magazines and a couple of small pieces of wire in a plastic bag. You’re going to need these wire bits or a paperclip to field strip the pistol due to the full-length guide rod. This is easily done and explained very well in a supplement to the SR 1911 operating manual so I suggest you read it. 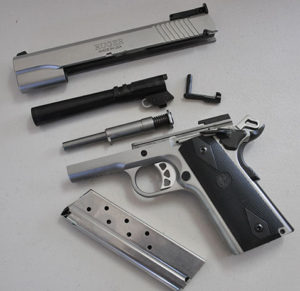 My first SR 1911 in 10mm was a pre-production “jury gun” and it didn’t work. Regardless of ammunition I experienced numerous feeding and extraction problems with every magazine of ammunition. Before you get all excited about that, let me explain that I sometimes help Ruger with product testing by shooting guns they send to folks within and outside the company – the jury. They do this to detect and fix problems leading up to final production and, in the case of my pistol, it went right back to the factory here in Prescott, Arizona where a couple of issues were identified and changes were made immediately to the production line. My second sample pistol runs like a clock and I’ve experienced no problems with hundreds of rounds of ammunition from several manufacturers in a variety of loadings.

During additional range sessions at Gunsite I ran the pistol through a variety of drills with complete satisfaction. Even with the hotter loads the pistol is comfortable to shoot due to its heft, those sticky rubber grips and that little bit of extra weight out front provided by the coned barrel and guide rod. Because it’s so well suited to the task, I sighted the pistol in at 100 yards and banged away at steel plates. Being in the midst of a heat wave I didn’t feel like shooting bench rest groups or chronographing loads so you’ll have to take my word that the pistol shoots better than I do and the manufacturers do a pretty good job of listing velocities on the ammunition boxes.

The online price for this pistol is in the seven to eight hundred dollar range and pistols are available at your local dealer. I’ve got mine; you should go get yours.