Some call them black rifles, AR-15s, M-16s, carbines, assault rifles or modern sporting rifles; I simply think of them as ARs, a whole family of rifles in thousands of variations kicked off by Armalite more than 50 years ago when Eugene Stoner set out to produce a modern rifle using aerospace materials and technology. The rifle that started it all was Stoner’s AR-10, a .308 Winchester caliber rifle Armalite hoped to sell to the U.S. military. The Army was impressed with Stoner’s rifle but they wanted something different – a smaller caliber and a lightweight rifle – so the team at Armalite downsized the AR-10 to create the AR-15 and the .223 Remington cartridge. The AR-15 went on to become the military M-16 while the AR-10 all but disappeared. Good things have a way of coming back around and I’m happy to say the rifle many shooters have been waiting for, and I’m one of them, is here. It’s a thoroughly modern rendition of the AR-10 Ruger calls the SR-762.

Before this gets too confusing I suppose a few words about caliber designations are in order. In the good ‘ol USA we like to refer to calibers one way while people in most of the rest of the world do it another way. We use inches, they use millimeters We’re right, they’re wrong. Anyway, some years ago we made a deal with our partners in NATO (the North Atlantic Treaty Organization) to standardize ammunition designations so the .223 Remington became the 5.56 NATO and the .308 Winchester became the 7.62 NATO. Although there are slight differences in American commercial ammunition and military specification ammo, for all practical purposes the .223/5.56 and .308/7.62 are the same.

Now that we have that out of the way, four years ago Sturm, Ruger & Co. decided to make an AR style rifle of their own, and in the usual Ruger fashion, make it rugged, reliable and of the highest quality. The result was the SR-556, a .223/5.56 caliber rifle operated by a short stroke gas piston for greater reliability and cooler operation than the original AR-15 (which uses a direct gas system of operation that causes the gun to run hotter and sometimes leads to reliability issues). I have been shooting an SR-556 for a couple of years now and it is the rifle I use for testing scopes, ammunition and accessories. It is very accurate, pleasant to shoot and 100% reliable.

When the SR-556 came out many of us hoped a .308 version was in the works. About a year ago I was told the rifle was in development and had an opportunity to shoot one a few months later. Much to my frustration, Ruger delayed introducing the SR-762 as they continued to test and refine the design for a very understandable reason: They refuse to put something into the hands of consumers until it is right in every way. The 762 is here now and I think it is exactly what anyone who wants a .308 caliber AR could want.

You can check out the specifications for the rifle on Ruger’s website so I won’t take up too much space here reciting figures, but here’s what I think you need to know: The rifle has a 16.12″ hammer forged, chrome lined barrel so it will shoot reliably and accurately. The barrel is fluted to save weight. The bolt and bolt carrier are chrome plated to increase reliability.

The rifle has a full length Picatinny rail on the topside for mounting optics and accessories and an aluminum forend drilled and tapped so users can attach accessories and configure the rifle according to their needs. Three hand guards and two sections of rail are included with the rifle. The rifle comes equipped with iron sights adjustable for windage and elevation that can be removed or folded down out the way of scopes, optics or whatever else you may want to mount on the rail. 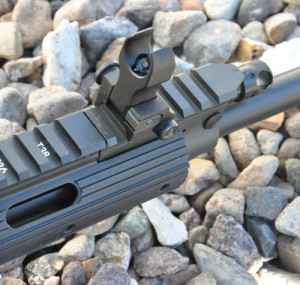 With the six position telescoping stock the rifle can be lengthened or shortened to fit any shooter. Since this is a gas piston rifle there is a 4 position gas regulator to control the two stage, chrome plated piston – this means the rifle can be tuned to shoot different ammunition or set up to run with a suppressor. The rifle comes in a zippered carrying case and includes four excellent and widely available 20 round PMAG magazines. The bare rifle weighs 8.6 pounds and the all up weight of my sample with the scope and a full 20 round magazine is 11.4 pounds. For those of you planning to bug out and head for the hills this rifle might be a bit heavy but for the rest of us it shouldn’t be a problem. 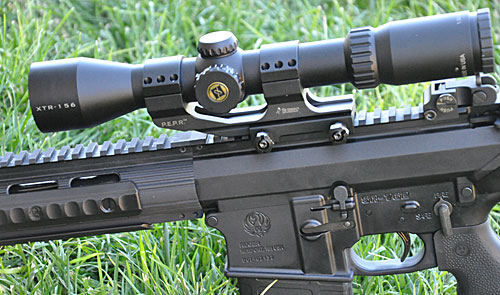 I installed a Burris 1.5-6X XTR (Extreme Tactical Riflescopes) with their AR-P.E.P.R. (Proper Eye Position Ready) mount on the SR-762. The scope has Burris’ XTR Ballistic 7.62 illuminated reticle, meaning it is calibrated for .308 ammunition. The scope is quick for shooting in close quarters yet has enough magnification to make target identification easier at longer ranges. I zeroed the scope at 100 yards and found that hits out to 400 yards were easy when I used the holdovers in the ballistic reticle. Although the reticle is calibrated to 1000 yards I haven’t given it a try. One of the nice features of AR style rifles is the way recoil is directed straight back with a minimum of muzzle rise. Add to that the smooth operation and recoil push of Ruger’s piston design and there is so little disturbance of the sight picture when the gun fires that you can watch your shots impact through the scope. I like that.

So what don’t I like? Well, the trigger needs to go. It’s a typical AR military style trigger, meaning it is gritty, heavy and has lots of over-travel. Not a problem when shooting quickly at short ranges but with a trigger pull average of about 8.5 pounds precision group shooting was a frustrating exercise. If I buy this rifle (“Honey, do we have any money?”) I’m going to put a Timney trigger in it just as I did with the SR-556 and get the trigger down to a crisp 3.5 pounds. The Timney AR trigger is a true “drop in” one piece unit that even a shade tree gun mechanic like me can install easily.

My sample SR-762 has been reliable and accurate. Groups with several types of ammunition from Federal and Hornady have averaged in the 1.5″ range at 100 yards. My best 5 shot group was fired with Federal Match ammunition and it measured .71″.

I have waited a very long time for a .308 AR and this rifle hasn’t disappointed me. It could be just the thing for those wanting an AR platform rifle with more power than the .223 can deliver. The Ruger SR-762 should appeal to a large segment of shooters and hunters and with the Burris scope and a Timney trigger it could be just the thing for that hog hunt I have been planning.