Was your first rifle a blued steel and wood .22? Mine was a bolt action Winchester Model 69A and it hooked me on a lifetime of shooting enjoyment. Which probably explains why I got a warm and fuzzy feeling when Ruger came out with their laminate wood stocked American Rimfire Target .22 model. This bolt action, heavy barreled version of the composite stocked American Rimfire shares the same action, adjustable Marksman trigger and short bolt throw and has a ½ – 28 threaded barrel. Speaking of the barrel, the 18” heavy (.860”) barrel is cold hammer forged and free floated in the laminate stock. The bolt knob is a little different, being reminiscent of high dollar target rifles rather than the round bolt knob found on the standard American Rimfire.

While the American Rimfire Target is offered in .17HMR and .22 Magnum I opted for one in .22 Long Rifle caliber. As I’ve previously tested (and bought) a .22 LR American Rimfire rifle I wanted to see how the rifles compared. The consensus among experts (well writers anyway) is that a crisp, 3 pound trigger is the Holy Grail of rifle triggers. Often wished for and seldom found this mythical trigger is generally available only after the expensive ministrations of a custom gunsmith. It’s a rare treat to find a perfect trigger on a factory rifle but that’s what I discovered on the .22 Target. This trigger consistently breaks crisply, without over-travel (movement of the trigger after the sear breaks or disengages) at 3 pounds. While the Ruger Marksman trigger on the rifle is adjustable I found no reason to touch it – why mess with perfection? 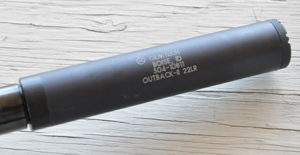 Since the barrel on the Target is threaded I decided to test it with my newly upgraded Gemtech II suppressor. The upgrade consisted of sending in my one-piece Outback II and having it converted to one with a screw in baffle. This makes the silencer much easier to maintain and clean and with relatively “dirty” .22 caliber ammunition that’s a big plus. Now you might wonder why I would think putting a silencer on a .22 bolt action rifle is a good thing when the Ruger 10/22 semi-automatic rifle is available in a threaded model – and I have one. Well, the semis have a couple of issues, one of them being they won’t run with some of the lower power .22 ammunition and they are actually noisier to shoot. If you want the ultimate in quiet a suppressed bolt gun is the way to go. In the case of the Target, with the can attached, the only sound is a “sproing” noise made when the sear releases the firing pin.
The quietest shooting ammunition runs at around 1,000 feet per second (fps) or less. That means it’s sub-sonic, as in the bullet doesn’t break the sound barrier and there is no “crack” when the gun fires. Although silencers can cut down on much of the noise from super-sonic ammunition they can’t do anything about that sonic “crack” once the bullet leaves the barrel. While some ammunition is marketed as sub-sonic you don’t necessarily have to use that to get sub-sonic performance. Just about all the .22 ammo marked as standard velocity or target ammunition is actually sub-sonic and works fine for quiet shooting with suppressors. In the case of the Target you hear the spring sound, a tiny “puff” from the muzzle then hear the bullet impact the backstop with a mild “thump”. 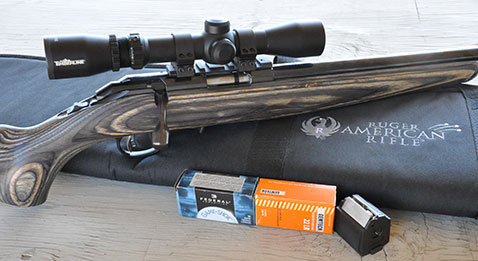 Like the other American Rimfire .22s the Target model feeds from any of the Ruger 10/22 magazines and the rifle ships with one 10 round rotary magazine. Feeding and functioning were 100% during my testing and the short throw of the bolt is a joy when shooting quickly. I tested the Target with a compact Burris Timberline 3-9 power scope and, after running a number of types of .22 ammunition through the rifle settled on two loads. The Target really liked Gemtech Silencer Subsonic ammunition, a 40 grain bullet at 1040 fps and Federal 38 grain copper plated hollow points at 1260 fps. To my immense joy I discovered the Gemtech load could be zeroed at 25 yards while the Federal ammunition gave me a 50 yard zero consistent with the 50 yard hash mark in the Burris scope reticle. That means I have a super-quiet short range load and a general purpose load for longer shots that work great with the scope and silencer. As far as accuracy goes, both loads consistently print ½” five shot groups at 25 yards. 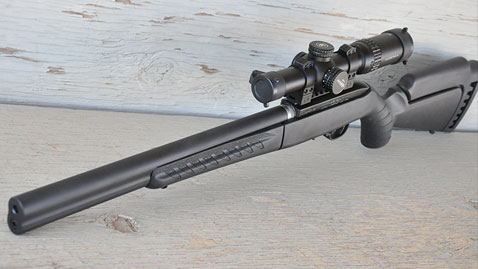 Ruger calls their screw on .22 suppressor the Silent-SR. Featuring a removable, easy to clean stainless steel baffle stack the Silent-SR is high on the list of things I plan to buy one day. The 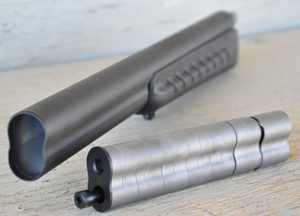 advantage of screw on suppressors is they can be used on several different rifles or pistols but for some folks the ultimate suppressors are those made integral to the barrel. Ruger has now introduced such a barrel that will work on any of the 10/22 Takedown rifles in their lineup and they’re calling it the Silent-SR ISB (for integrally suppressed barrel). The normal way to integrally suppress barrels would be to cut the barrel back, thread it and then screw on a silencer of the same barrel diameter. The geniuses in the Ruger engineering department could have done that – it would have been easier – but instead came up with an entirely new design that looks like an over and under barrel 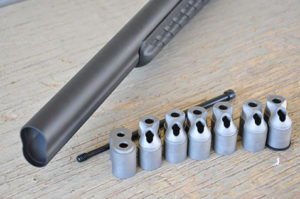 arrangement. The “upper barrel” contains a seven baffle stack straight out of the Silent-SR parts bin and the “lower barrel” is actually an expansion chamber that collects gas and makes the suppressor more efficient. Efficiency equals quieter when we’re talking about suppressors so what you have here is an elegant, good looking, versatile, ingenious and very quiet integrally suppressed barrel unit. The 10/22 barrel is effectively “cut off” at just under 11 inches and the overall length of the integral barrel is just a hair over 16 inches in order to keep the Bat Men happy.

Initially sold as a conversion barrel, the ISB will fit the original 10/22 Takedown, the Charger Pistol version, the Takedown with the fluted target barrel and the Takedown Lite. At some point you may see the ISB sold in a kit form that will include a 10/22 Takedown with a standard and ISB barrel in one of those carrying bags Ruger likes to package the Takedowns in. How does it shoot? With good ammunition it produced ½” groups at 25 yards and is very, very quiet with sub-sonic ammunition. You hear the bolt cycle, a tiny puff from the end of the barrel and then the bullet striking the backstop. This ISB barrel has now moved to the top of my “must have” list!

When I got my first .22 rifle as a boy I couldn’t have imagined the high quality guns, ammunition and accessories like silencers we have available today. If the boy in you needs a good .22 these products from Ruger are as close as your local gun store.