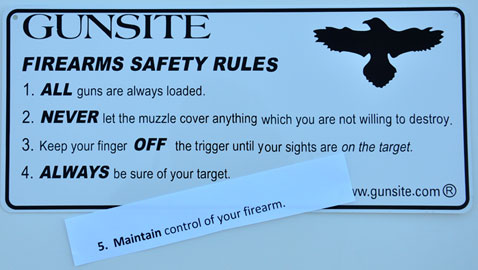 It rarely happens, but when we hear about a small child getting their hands on a gun and shooting someone it’s big news. The media and political exploitation of these tragedies blows them out of proportion and indoctrinates the public to believe more regulation, gun control or “common sense solutions” are the answer. It does little good for responsible gun owners to point out that the statistical probability of one of these shootings is close to non-existent, that more children drown in buckets, die in vehicle accidents or are left in hot cars to die, because our opponents and their willing accomplices in the press have seized the high moral ground with their “If it will save the life of one child…” campaign. As far as I’m concerned, I would like to see Gabby Giffords, who has raised millions with this specious argument, prove she really cares about children by doing something more productive – like focusing her efforts on the dozens of children who drown in backyard pools in her own state of Arizona each summer.

I understand we’re in a political fight with the gun control crowd and reason has nothing to do with it, so what can we do to avoid giving them ammunition to fire back at us? One thing we can do is educate gun owners about firearms safety and I think its time we added a new rule to the cardinal Four Rules of Firearms Safety:

Never let the muzzle cover anything you aren’t willing to destroy
Don’t point the barrel of a gun at yourself, your friends, your children, or anything you don’t want to kill or destroy. Don’t wave guns around, don’t let others do it in your presence and don’t let anyone tell you, “It’s okay, it isn’t loaded.” See Rule 1. If someone points a gun at you, you could assume they have lethal intent and react accordingly.

Keep your finger off the trigger until your sights are on the target
Don’t touch the trigger of any firearm until you’re pointed at a target and ready to shoot. People tend to place their finger on the trigger as soon as they pick up a gun – after all, that’s where it belongs, right? No, not unless you are pointed at a target and planning to shoot. The most common reason for self-inflicted gunshot wounds to the legs and butt is because people get in a hurry to holster and neglect Rule 3. The gun won’t fire by itself – even though we hear this as an excuse all the time – the gun will only fire if someone pulls the trigger. Don’t touch the trigger of any firearm you don’t intend to fire.

Be sure of your target
Know what you’re shooting at and where the bullet will go if it passes through the target. You’re responsible for a bullet from the time you fire the gun until the bullet comes to rest, whether you intended for it to strike there or not. When we speak of defensive shooting, we can only shoot at clearly identifiable threats where we can articulate the need to use deadly force, “He had a gun, he said he was going to kill me and I knew I would die if I didn’t shoot to stop him.” Shooting at shadowy figures or scary noises can end in tragedy and don’t, for one second, buy the argument that you can shoot anyone who happens to be in your home due to some version of a Castle Doctrine law. That is, unless you want to spend the rest of your life living in a concrete room making new friends.

I learned these firearms safety rules from Gunsite founder Jeff Cooper, who said they suffice; if you practice them, and make them part of your character you will never have an accident with a firearm. Jeff didn’t like folks messing with his rules, so it is with some trepidation I suggest the need for:

Maintain control of your firearm

Uncontrolled firearms, guns unsecured and left lying around, are the ones we hear stories about. All gun owners should practice safe gun handling (Rules 1-4) and should keep guns out of the hands of children. As well, we must keep guns out of the hands of those who would misuse them. Being responsible and in control of our firearms, to my way of thinking, beats being forced to lock them up to the satisfaction of some government official. Rule 5 has been around for a while – I take no credit for it – but I would like to get the word out to educate gun owners, help keep our children safe and blunt the attacks of the gun control people. Handle firearms safely and responsibly and maintain control of your firearms.

If you would like to learn more about firearms safety and securing guns in the home check out these links:

Children and Guns In The Home

Children and Guns In The Home

Ed Head - August 27, 2013 0
Anyone living in or visiting a home containing unsecured firearms needs to be thoroughly trained in firearms safety and safe gun handling. If people cannot be trained, as in the case of small children, the guns must be secured.