It’s a dilemma we all face – How to keep personal defensive firearms (PDFs) accessible yet secure. Are you going to have time to go down to the basement and open the gun safe when the spit hits the fan? Probably not, but leaving your tricked out AR carbine in the corner of the bedroom risks it falling into the wrong hands. Children, untrained individuals and criminals are some of the people who shouldn’t be getting their paws on your guns. We’ve talked about keeping guns away from children and the untrained but keeping guns out of the hands of criminals is something we probably don’t spend enough time talking about. Why? Well, lately, some of the people who don’t think you and I should own guns – any guns – are beating us about the head and shoulders with the argument that we’re a primary source of guns for criminals through stolen guns. If that weren’t bad enough, how would you feel if you came home one day to find a bad guy in your house brandishing a gun you hadn’t secured? 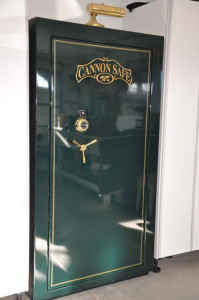 Let’s look at different levels of firearms security and examine the pros and cons of each, starting with what I’m going to call stored firearms. These are guns locked in gun safes, safes sufficiently strong to thwart most burglary attempts. Yes, all safes can be opened eventually but that’s not the issue. I figure the kind of person I need to defeat is a junkie burglar doing a smash and grab, who is going to take one look at a real safe and give up any thought of opening it. On the plus side, we can assume our gun safe is secure, but on the negative is the amount of time it takes to open it and gain access to a firearm in an emergency – like someone is kicking your door in. Some safes are quicker to open than others; dial locks are slower than push button types, but in either case a gun locked in a safe is going to take a little time to access. I consider the guns I keep in the safes to be in deep storage and they aren’t a consideration in my security planning for immediate use. 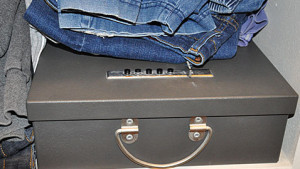 Moving down from safes, the next level of security might be described as locked but accessible. I refer to small gun safes that usually hold one gun as lock boxes. These can be stolen fairly easily because they are designed to be portable. They usually have a provision for screwing or bolting them to a shelf or piece of furniture but they can be pried loose with a little effort and most can be opened with a hammer, screwdriver and a bit of time and determination. 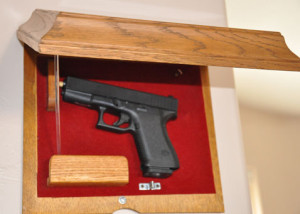 What lock boxes do provide is security from children and unauthorized users while allowing for quick access to the firearm. Some use combination locks requiring batteries, others use mechanical push button locks and newer models read fingerprints or receive a signal from a bracelet. While most lock boxes are designed for handguns there are also gun cabinets – something like a small safe – that hold a single shotgun or rifle. 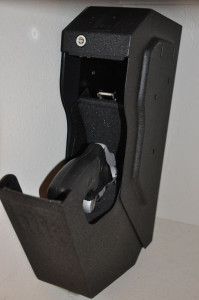 discovered, but that might be stretching the point. And I would guess the vast majority of guns kept in homes are hidden or simply put away in places like closets and drawers with no security at all, places even a junkie burglar is smart enough to look into. On the other hand, there are some ingenious ways to hide firearms. I’ve seen beds, couches, picture frames, shelves and other items that offer concealed storage. Bearing in mind guns hidden in these places aren’t secure, these hidden storage solutions are likely to defeat our junkie burglar while providing easy access to the PDF.

The most secure firearms are the ones you carry, as in keep attached to your person. So long as you are awake and alert the gun(s) are completely safe and secure and are no danger to children or untrained people. Then again, these guns are a real problem for bad guys because they are instantly available to you and you alone and, as I said, if you are alert and awake you cannot be taken by surprise. So while safes, lock boxes and hiding places all have their purpose, the best PDF is the one you are wearing on your person – right now. As Jeff Cooper taught us, and said many times: “If your pistol is not within reach as you’re reading this, you haven’t learned the lessons we teach at Gunsite.” Good advice, I recommend you follow it. 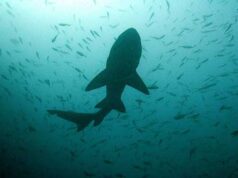 Monsters Rise to the Bait 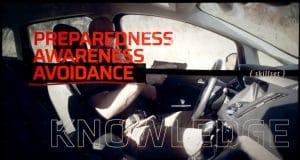 Michael Bane - September 1, 2020 2
This week on Triggered we present a new addition: YOUR BEST DEFENSE. Michael Bane and co-host Mike Seeklander welcome Cecil Burch, BJJ master and member of the ShivWorks Collective for an in-depth look at surviving modern America.