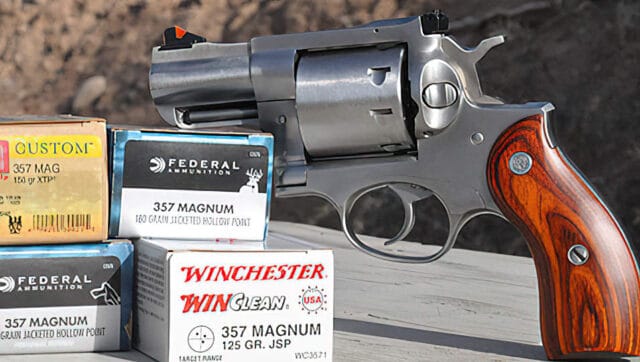 There isn’t much you can’t get done with a .357 Magnum. During my Border Patrol days I never felt poorly armed while carrying one and saw them take down people, large and small animals and an assortment of other things like cars, usually with one shot. While you might argue that more potent calibers are needed to bring down beasts like the great bears, I never encountered one on the border so I put my faith in the .357 Magnum. We used a variety of ammunition in our Magnums; early on it was the 158 grain jacketed soft point. While a terrific one-shot-stop round on people and a round that easily penetrated walls and sheet metal the heavy JSP bullet passed right through small, thin skinned animals like dogs and coyotes without expanding and did little damage unless it hit bone or a vital organ. By the way, in case you’re wondering about the dogs, from time to time rabies epidemics consumed the border and we were forced to put these animals down before they could harm us, the illegal aliens or the citizens in the nearby communities. On the other end of the .357 ammunition spectrum we have the lightweight, high velocity rounds like the 110gr. jacketed hollowpoint (JHP). These rounds worked great on small critters but not so much on the big ones and were unreliable at penetrating barriers – sometimes they worked, sometimes they didn’t. Often considered the gold standard for .357 Magnums, we have the 125gr. JHP. This load worked well on just about everything, being a high velocity hollowpoint that generally expanded well in tissue, but the downside as far as I was concerned was the tremendous muzzle blast and recoil this load produced in a medium frame, four inch barreled revolver. While I was never much bothered by muzzle flash when shooting at night, some of that 125gr. stuff produced a huge fireball. The load I finally settled on was the Winchester Silvertip 145gr JHP. This load had a flash suppressant in the powder so there was little muzzle flash; it was reasonably mild to shoot and performed spectacularly across a broad range of uses. 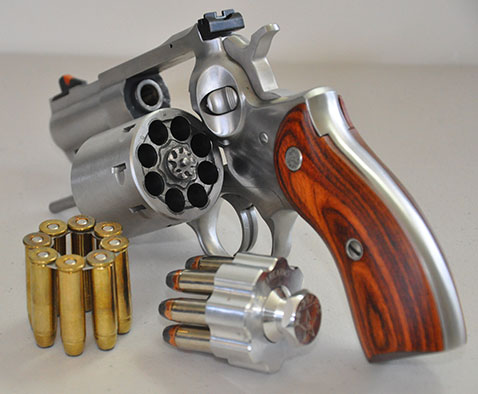 Which brings us to a new .357 Magnum Redhawk revolver from Ruger, the latest in their series of large frame, short barreled, round-butted revolvers. Previously, Ruger has made this model in .44 Magnum and .41 Magnum. The .357 version has an eight shot cylinder that allows you to load it conventionally, as in dropping a round in each chamber, or with full moon clips. Three clips are provided with the revolver. For those who might wish to use a speed loader ones made for eight shot Smith & Wesson N frame revolvers work just fine in the big Ruger. While I’m familiar with speed loaders from HKS and Safariland there’s a new outfit producing them from machined aluminum called 5 Star Firearms. I used a 5 Star speed loader during my range work and it’s a nice part. Other features of the Redhawk include an easily replaced red ramp front sight, the usual Ruger white outline, fully adjustable rear sight, a 2.75” barrel and attractive, smooth 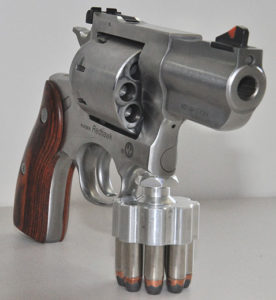 Altamont stocks on the rounded grip frame. With an un-fluted cylinder, a heavy frame and Ruger’s triple locking cylinder this revolver is about as strong as any .357 Magnum ever made. Because of the shape of the frame and the stocks I found I was able to reach the smooth trigger and get enough finger wrapped around it to overcome the stiff double action trigger pull that averaged about 11.5 pounds. I was surprised by the weight of the single action pull, which, according to my trigger gizmo averages almost 9 pounds, because it actually feels much lighter. While I like lighter triggers on my revolvers I have to admit the trigger on this one works fine and I had no trouble overcoming it to get good hits.

One of the great features of .357 Magnums is the variety of ammunition you can shoot in them. This ranges from mild .38 Special target wadcutters to .38 Special and .357 Magnum defensive and hunting ammunition and everything in between. Handloaders will find this revolver easily handles any load but just because it’s very strong doesn’t mean you can get away with experimenting with super hot loads that go beyond those published in loading manuals from companies like Speer and Hornady.

To give me, and you, an idea what shooting this ‘Hawk is like I repaired to the range with one hot .38 Special load from Cor-Bon and seven full-house factory .357 Magnum loads. Considering this revolver shoots better than I do and how well, or poorly I’m able to shoot has nothing to do with your results I decided not to bother shooting groups. Instead, I ran a full cylinder of each load over a chronograph to give you an idea of the difference in published velocities compared to what you can expect in the shorter barrel of this big snubbie. Here’s what I found (PV stands for published velocity and AV means actual velocity, average of 8 rounds, fps means feet per second.)

Shooting around 100 rounds of hot .357 Magnum ammunition in one session, even in a big revolver, tends to get your attention. While the curved grip and graceful stocks look nice they aren’t particularly well suited to allowing for a painless shooting experience. My days of enjoying the trigger guard slamming into my knuckle when shooting hot loads are long past so I used a shooting glove to absorb a little of that and give me a better grip on the revolver. Surprisingly, the Hornady 125gr. load was reasonably pleasant to shoot while the Federal 125, at a little less velocity, was brutal. The Federal 140 and 180 grain loads were very consistent in shot to shot velocity with the 140 being an easy load for me to shoot well. You would normally expect to lose 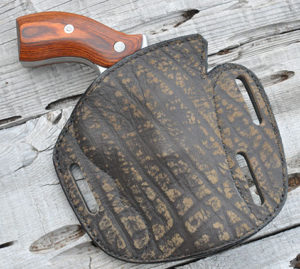 quite a bit of velocity when shooting from a shorter tube but a couple of these loads actually exceeded their published velocities, most notably the Cor-Bon .38 Special load was more than 100 feet per second quicker.

If you can’t get the job done with eight rounds of .357 Magnum ammunition you’re unlikely to get it done with any handgun. While a little big and heavy for concealed carry this revolver packs easily in one of Rob Leahy’s Sourdough Pancake holsters and is an ideal combination for walking around in the great outdoors. Lastly, it would be great if Ruger could convince Hogue to make a grip for these round butt Redhawks like the grip for the new GP100 .44 Special. That grip is close to perfection for heavy recoiling revolvers.