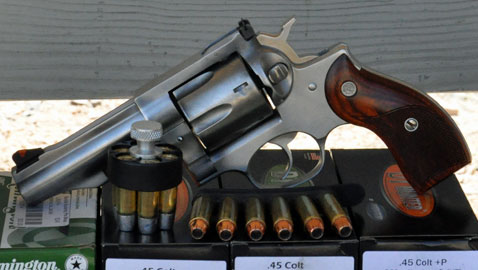 When the .45 Colt appeared in 1872 it was the magnum handgun round of its time. With a 250gr. bullet over 40 grains of black powder, the load produced 1,000 feet per second (fps) out of the new Colt Single Action Army with a 7.5 inch barrel. That loading didn’t last long as the Army reduced the powder charge and eventually settled on a loading that drove the bullet at a more manageable 800fps. Over time we have learned that a big, heavy bullet at moderate velocity will get the job done, be it putting down a man or a large animal. Modern, smokeless powder loadings for the .45 Colt generally push a 250 or 255gr. bullet at around 800fps. Some years later, in the early 1900s, the Army went looking for a semi-automatic pistol design and they specified that it should shoot a .45 caliber bullet at around, you guessed it, 800 feet per second. Thus inspired, the great John Moses Browning invented both the .45 ACP (Automatic Colt Pistol) round and the 1911 pistol.

While the .45 ACP round has remained popular the .45 Colt all but disappeared, only to be revived by the growth in Cowboy Action shooting and the interest by handgun hunters in wanting to duplicate or exceed what could be done with the .44 Magnum by increasing the power of the .45 Colt. To get this done new and stronger revolvers needed to be created and none are stronger than those made by Ruger. The subject of this article is the Ruger Redhawk, a massively sturdy double action revolver that will shoot both .45 Colt ammunition as well as .45 ACP. To accomplish this, Ruger has re-designed the cylinder of the Redhawk .45 so it can be loaded in the usual way with .45 Colt ammo and with .45 ACP ammo through the use of clips that allow the rimless ACP ammo to headspace and extract. Holding six rounds and usually referred to as “full moon” clips, these thin steel clips appear very similar to the ones Ruger recently designed to hold rimless 9mm ammunition in the Ruger LCR compact revolver. Unlike clips I’ve used in the past that require a tool to insert the loaded cartridge and another to pry the case from the clip after firing, these clips work by simply snapping the case straight in or out without twisting or prying. 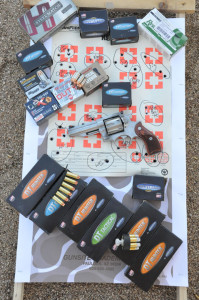 Having the ability to shoot either .45 ACP or .45 Colt ammo means this Redhawk can shoot a huge variety of available ammunition and can be loaded to meet any task you might expect a handgun to handle, from target shooting, to personal defense, hunting small and large game and defense against the largest of predators. For my test I fired thirteen different .45 ACP loads and five .45 Colt loads. I chronographed all of them and fired 3 shot groups from standing, shooting with both hands, at 15 yards. You might ask why I didn’t shot the usual 25 yard groups from a bench rest and the reason is I don’t think that’s the way you are going to use this revolver in the field. During my research I read articles by writers I respect who shot longer barreled Redhawks equipped with telescopes off the bench and proved that the revolver is a tack driver – usually producing 1 to 2 inch groups, so we know the gun will shoot. During my shooting I found little variation between loads, as all of them averaged about 1.5 inch groups, which is good enough for me when shooting on my hind legs.

Here are the loads I shot:

The .45 ACP ammunition was pleasant shooting in the big, heavy Redhawk. I normally shoot .45 ACP ammo through a 5 inch barreled 1911 pistol so I was a little surprised at how much the 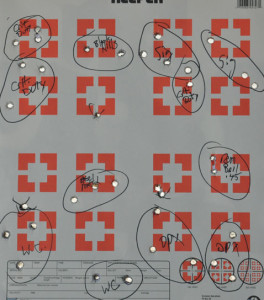 velocity of these loads dropped in the 4 inch barreled Ruger. The shorter barrel and gas escaping at the barrel cylinder gap of the revolver probably explains this. The .45 Colt loads from Doubletap produced velocities more consistent with those printed on the boxes. The first three of these loads listed were easy shooting but the last two really got things rocking and rolling with serious recoil. The 360gr and 335gr loads feature hardcast, flat pointed lead bullets designed for deep penetration and should be suitable for shooting anything you might want to take on with a handgun. There may be some hotter .45 Colt ammo available but I can’t imagine needing any more power or penetration than these loads are capable of delivering. They put the .45 Colt on a plane equaling or exceeding the .44 Magnum and fall behind the velocity of the .454 Casull by a couple of hundred feet per second.The .45 Auto – .45 Colt Ruger Redhawk is a really strong revolver you could spend a lifetime shooting and never wear out. As I mentioned in my earlier article, it can benefit from a lighter mainspring to improve trigger pull. The round butt stocks on this Redhawk are attractive but for shooting the heaviest loads I would look to change them with a grip that features a filler behind the trigger guard – to prevent my delicate knuckle from being slammed – and adds some material to the back strap. As of now, I don’t know of anyone making a grip for a round butt Redhawk but I expect that will come about with time, probably from Hogue, and I’m wondering if I could persuade Herrett’s to make a set of their Jordan Trooper wooden stocks to fit this big revolver.If you’re looking for a double action revolver with the ammunition versatility to shoot everything from .45 ACP practice and defensive loads to .45 Colt heavy hunting loads you need look no further than this newest version of the Redhawk. It packs all the power you could need and might be just the thing for wandering around in the woods, especially in bear country.