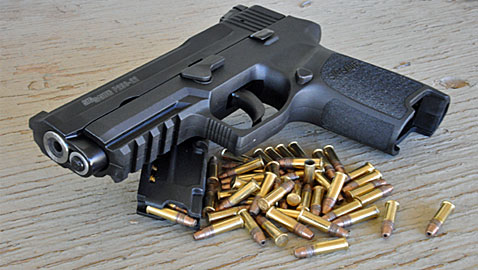 Sometimes you miss the boat. When Sig Sauer brought out the Sig 250 a couple of years ago I failed to grasp what made this new pistol so interesting. After all, it was another double action only (DAO) pistol; something Sig had been making for years. By the time the Sig 320 came around – a striker-fired version of the 250 – I had it figured out. A modular pistol with a serial numbered chassis that can be moved from one inexpensive replacement frame to another and the availability of slide and barrel X-Change Kits makes the 250/320 a highly convertible design. Frame sizes include full size, compact and sub-compact and the top ends can be swapped out for full and compact size slide and barrel combinations (the compact slide fits on the sub-compact frame). Slides/barrels are available in .22LR, 9mm, .357 Sig, .40 S&W and .45ACP. That is a lot of mix and match, all accomplished with one chassis and the parts necessary to set the gun up in your choice of calibers and sizes.

As you may recall, I have written several articles on the Sig 320 for Downrange.TV. These have included the 9mm, .45ACP and the Super Sig, that being the 9mm as worked over by Bruce Gray and his crew. This year at SHOT I fired the P250 in .22LR caliber and was immediately taken with it. After a bit of begging and groveling I was promised a 250 in .22LR along with a 9mm X-Change Kit, and sure enough, in due course they arrived. I have to tell you the .22LR Sig 250 is just, well, cute. It’s light as a feather, there is very little spring pressure to overcome when racking the slide and shooting it is great fun. The only thing slowing the fun down is the 10 round magazine capacity and the need to refill the two magazines that come with the pistol every minute or so. The three dot white sights were perfectly adjusted and I didn’t touch the adjustable rear sight during my shooting sessions. Not that adjustable sights aren’t a good idea, they’re a necessity on a .22, but shooting several brands of .22LR ammunition I had no need to make adjustments. That might be because I was having so much fun shooting the 250 I didn’t bother doing accuracy testing – I blew off a couple of hundred rounds practicing hip and point shooting at close range and ringing a steel plate at 25 yards. Good enough, and great fun, especially because the pistol ran through all this ammunition without a single malfunction.

The real beauty of the P250 X-Change system is the ability to switch a service pistol into a .22 for inexpensive practice and training. To make the switch remove the magazine and lock the slide to the rear, ensuring the pistol is unloaded. Even so, it’s a good idea to physically and visually (look and stick a finger into the magazine well and chamber) clear the pistol. After confirming the pistol is unloaded rotate the takedown lever down, grasp the slide, release the slide stop and ease the slide forward off the frame. Replace it with the other slide/barrel/recoil spring assembly and you’re done, in this case, a .22 to 9mm compact pistol conversion. The same frame is used so there is no need to take the chassis out of the frame and the .22LR and 9mm magazines fit in the same frame. While the .22 pistol comes with two magazines the X-Change Kit comes with a single 15 round magazine. Happily, the 17 round P320 magazines fit as well and protrude slightly below the frame. If I decide to start carrying the 250 as a concealed pistol I think I will carry it with the 15 round magazine in the pistol and use a 17 rounder for a spare. 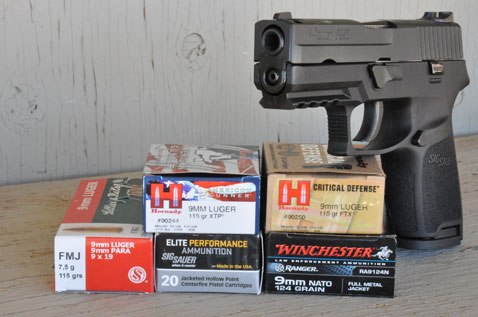 The 9mm version of the P250 shoots as well as the .22LR. The 9mm slide uses three dot fixed sights of the excellent Siglite night sight variety and I found them to be correctly zeroed back to 25 yards. The 9mm slide and barrel is about 4 ounces heavier than the .22 and, of course, the recoil spring is stiffer. I fired a bunch of different 9mm defensive and training ammunition in the 250 and all of it fired in the predictable, reliable and comfortable way I have grown accustomed to when shooting Sig pistols. While Sig lists the trigger pull of the 250 at 6 pounds my electronic trigger gauge gave me a reading a bit over 7 pounds. The feel of the P250 trigger is smooth, light and consistent and I had no trouble controlling it and making headshots on 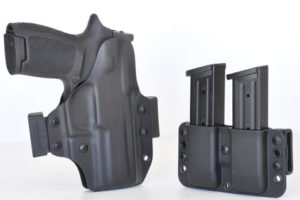 a steel target at 25 yards. Combined with the night sights, Picatinny rail and compact size the P250 in 9mm is an excellent choice for a concealed carry pistol. Towards that end, I ordered a Blade-Tech Total Eclipse holster, a lightweight, versatile design that can be set up for left and right side belt, inside the waistband or appendix carry. It’s a flat, body hugging, high ride design that relies on a snug fit for security without the need for straps, push buttons or other releases; simply obtain a firing grip on the pistol and pull straight up. I like it very much.

Sig has come up with a winner in their X-Change P250 system. A training pistol with exactly the same frame size and trigger pull that shoots inexpensive .22LR ammunition instead of service ammunition is a big plus. The .22LR version is also a great pistol to start new shooters on before moving them into the centerfire calibers, and, if you’re like me, you will have fun plinking and practicing with the .22.