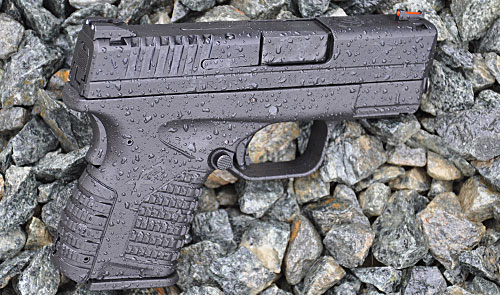 When Springfield announced their new sub-compact .45ACP pistol earlier this year they took out full page advertisements in the firearms press that said, “The .380 was a cute fad. Now let’s get back to business.” As someone who has spent a great deal of time carrying, shooting and testing various .380ACP and 9mm pocket pistols I was taken aback. After all, I’m a .45ACP kind of guy and my pistol of choice is the 1911. But, I admit it; I have strayed from the Gospel of Cooper while having flings with lesser pistols… many of them. Having thus sinned I thought it best to redeem myself by investigating this new .45 hand cannon.

When I showed an interest in the XD-S some well meaning folks warned me to expect punishing recoil and hands chewed up by the aggressive checkering on the little pistol. Although I accepted this advice I was somewhat skeptical. After all, I thought, I have fired other small .45ACP pistols without damaging myself and the XD-S, although a lightweight, weighs 26 ounces fully loaded; shouldn’t be too bad. And guess what? It isn’t bad at all. I really enjoy shooting this little pistol. It’s lots of fun and I could shoot it all day.

Stats and Info
The XD-S is a continuation of the popular Springfield XD line of full size and compact pistols in 9mm, .40S&W and .45ACP calibers. Up to this point, my experience with them has been limited to seeing them come through pistol classes, where they have operated without a hitch. The XD-S is the smallest of the lot with a barrel length of 3.3 inches, a height of 4.4 inches and a width of only one inch, making it particularly suited for comfortable concealed carry. The frame is polymer 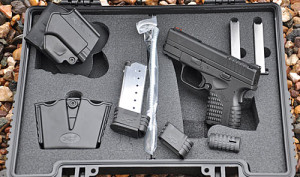 with an aggressive checkering pattern Springfield calls enhanced grip texture. The slide is forged steel with a Melonite black treatment. The rear sight is a two dot combat style, while the front has a red fiber optic insert. I really like the sight picture this combination provides as its both fast and works well for precision shooting. Although the pistol grip is very thin Springfield provides a replaceable backstrap so the individual shooter can adjust the grip to fit their hand. There is a magazine release button on both sides of the frame making the pistol equally suitable for shooting with either hand and, as small as this pistol is, there is even a short section of rail on the front of the frame for installing lights, lasers and bayonets (okay, just kidding about the bayonet). My pistol arrived in a lockable case with a holster and dual magazine pouch, two flush fitting 5 round magazines, two additional fiber optic inserts for the front sight and the obligatory padlock; this one capable of locking up a motorcycle. 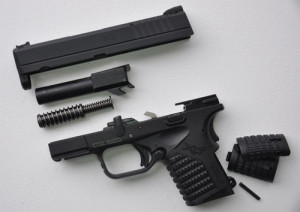 The pistol has several safety features, to include firing pin, trigger and grip safeties, meaning the pistol will only fire if gripped correctly while the trigger is pressed all the way to the rear. The trigger of my sample breaks crisply at 6.25 pounds and has a very short re-set, a feature I appreciate because it enhances my shooting ability. Another interesting safety feature is what Springfield calls “fail-safe disassembly”. This means the disassembly lever cannot be turned to take the pistol apart if there is a magazine in the pistol, nor can a magazine be seated with the lever in the rotated position. Lastly, the pistol has a loaded chamber indicator that sticks up atop the slide when there is a round in the chamber. This makes it easy to confirm whether the chamber is loaded and anyone observing the pistol can verify its status without having to handle it.

Takedown for cleaning is easy: After making sure the pistol is unloaded and the magazine is removed, lock the slide to the rear, turn the takedown lever forward and up, pull the trigger and move the slide forward off the frame. The dual recoil spring assembly and barrel can then be lifted out of the slide. 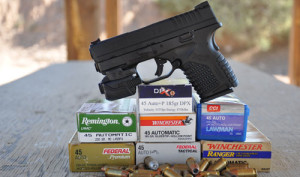 As I said, the XD-S is fun to shoot and my test pistol had no trouble firing everything I fed it. This included ball, match wadcutter and every kind of defensive hollowpoint ammunition I could find in my ammo locker. My fail proof test ammunition for .45s is the Federal 185 grain hollowpoint, often called the “flying ashtray” because it has such a large hollowpoint cavity. Many .45 pistols choke on this round but the little XD-S had no trouble with it. The other round many .45s won’t run is match wadcutter, a target round that often fails to feed or cycle the action, but the XD-S fired them with ease.

Comparing velocities between a 4.25″ barreled Novak Commander and the 3.3″ barreled XD-S showed a velocity loss averaging about 50 feet per second (fps) in the shorter tube. Here are the average velocities of some of the rounds I fired through the XD-S:

The little pistol hit where I aimed it out to 25 yards and fed everything. What’s not to like? 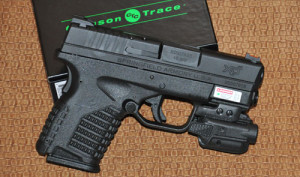 Just as I received the XD-S for testing Crimson Trace introduced their new green Rail Master laser. The green Rail Master follows on their red model and is a little bit bigger but it fit perfectly on the XD-S. To me, this is a match made in heaven so I scurried off to Simply Rugged Holsters and asked Rob Leahy to make me a carry holster. A week later I returned to discover Rob had made me everything from a pocket holster, to an inside the waistband holster, including a fancy one for the XD-S / laser combination finished in wildebeest leather (Cool!). Every pistol guy needs a custom leather craftsman and having one who can do fine work in a hurry is just great. By the way, Rob was so impressed with the XD-S that he bought one and was wearing it, complete with a Crimson Trace Rail Master, in an inside the waistband holster when I picked up my leather.

I’m planning on carrying the XD-S for awhile to see how we get along. The compact size and light weight, combined with the power of the .45ACP make for a compelling combination. I think this may end up being a long term affair. I’ll let you know how it turns out.

For more information about the Springfield Armory XD-S, visit www.springfield-armory.com. 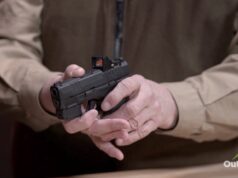 Shooting Gallery: All About Optics 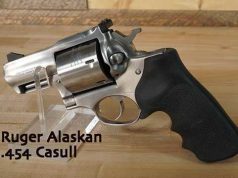 Ed Head - October 29, 2015 0
Given the popularity of this new pistol, Ed Head enhanced it for concealed carry, so here’s his version of the Super Mini Glock.