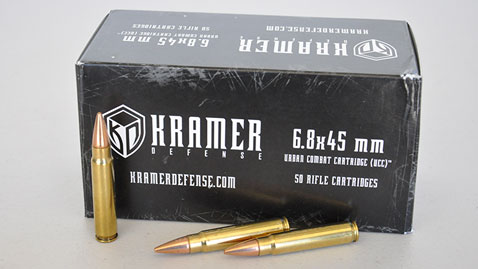 What do the 6.8 SPC, 6.5 Grendel and 300 AAC Blackout cartridges have in common? They’re but three of the cartridges created to improve the performance of America’s service rifle and the 5.56 NATO cartridge. During the past 60 years or so controversy has surrounded the .223/5.56 cartridge designed for the M16 rifle and its many variations. This has led to considerable tweaking of the rifle and cartridge as well as the creation of numerous alternative cartridges, each being touted as the solution to some problem or another. I’m the first to admit I’m no expert on all this, nor do I have a dog in the fight but I think if you look into it you might find one thing all these alternative rounds have in common, that being an attempt to make the M16/M4 as “powerful” as the Soviet 7.62X39 round used by the vast majority of America’s enemies in the most universal battle rifle of them all, the AK-47.

Each of the cartridges designed as a solution to the problem was launched in the hope of improving the battle-worthiness of the M16, a noble goal. I rather imagine there was a bit of high finance calculating going on when the designers added up the profits they expected to make after convincing the U.S. military to buy their product and convert millions of weapons to their cartridge. Regardless, none of these projects has managed to sway the minds of the generals or the bean counters and the M4 soldiers on as the most evolved military rifle of all time.

And that brings us to the latest cartridge improvement I’m aware of, the 6.8 Kramer Urban Combat Cartridge (UCC). Designed by a fellow over in La Vegas, Larry Kramer, this new offering addresses many of the issues and problems associated with earlier attempts to come up with a better mousetrap while easily besting the 5.56 and 7.62X39 rounds in ballistic effectiveness. Requiring only a barrel change and a modification to the standard 30 round magazine, the Kramer round is compatible with all other parts of the M16/M4 platform, right down to the packaging of the ammunition. Based on the 5.56 cartridge case, the Kramer can also convert the M249 SAW with nothing more than a barrel change. Using a 110 or 115 grain bullet of .270 (6.8mm) caliber the Kramer round launches a bullet at around 2500 feet per second (fps) from a 16” barrel and produces just under 1600 foot pounds of muzzle energy. This is an improvement in energy of 42% over the 5.56 NATO round and 10% over the 7.62X39 AK round.

How does the 6.8 Kramer compare to the Grendel, Blackout and SPC?

The ballistics being pretty close I think what tips in the favor of the Kramer is it’s easy and less costly to convert. Change the barrel, modify a magazine and you’re done. Using the lower from a Ruger SR556 I dropped on the upper provided by Kramer and completed a conversion to the new round in about 30 seconds flat. The 16” barreled upper I received for evaluation is completely familiar to anyone who has spent some time around the AR platform and appears identical in all respects, from the bolt carrier to the barrel and forend. The receiver is marked to indicate it is a 6.8 Kramer and the barrel is stamped “KD 6.8 X 45 UCC”. I asked about the barrel twist on my sample and was told it is a “chromoly Lothar Walther 4 groove polygonal rifling 1-11.30 twist” barrel. The upper came equipped with a Daniel Defense quad rail forend and rear sight. I removed the rear sight to make way for my usual AR test optic, a now out of production Burris 1.5-6 XTR illuminated reticle scope in their P.E.P.R. mount.

Kramer’s information indicates the 6.8 UCC generates about 30% more felt recoil than the 5.56 NATO but you couldn’t prove it by me. While there seemed to be slightly more kick when shooting from the bench I found the recoil to be just like that from a 5.56 AR – inconsequential. The rifle ran flawlessly throughout my test of close to 100 rounds of ammunition, also provided by Kramer. The 110grain load chronographed right on the money with an average of 10 rounds producing 2545 feet per second. In my experience, most AR style rifles I have tested produce 1.5 to 2 inch groups or greater in my hands. The 6.8 UCC bested that with an average of 1.075 inches for six, three-shot groups fired. One group went into an astonishing .26”, the best group I can recall firing from any AR, ever. Whatever the case, the ballistics, the bullet, the load or the barrel, in combination they produce a very accurate rifle.

Is the 6.8 UCC the answer to improving the M4? It seems like it to me but as we’ve seen the controversy over the M16 platform has been going on for decades and I don’t expect to see it resolved any time soon. In the meantime, if you’re looking for an upgrade in lethality and accuracy for your AR pattern rifle you might want to contact Mr. Kramer. His website lists ammunition and complete uppers for sale at reasonable prices and I think he really has invented a better mousetrap.