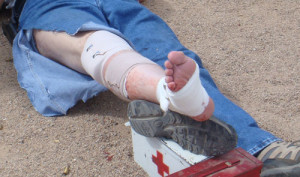 Alright guys, let’s admit it; we all learned to shoot watching our heroes on television and in the movies. As a youngster I would try to outdraw Marshal Dillon at the beginning of Gunsmoke then manfully shove my pistol into the holster just like Paladin did in Have Gun, Will Travel. This childish play with a toy gun was harmless but there are some serious issues involved with slamming a loaded pistol into a holster. Putting the pistol away quickly or forcefully is what I refer to as speed holstering, perhaps the most evil of bad habits one can acquire as a shooter. Speed holstering is tactically unsound, very unsafe and probably accounts for the majority of self inflicted wounds during handgun training.

Although there may be some very good reasons for drawing a pistol quickly from the holster there is almost never a reason to be in a hurry to put the gun away and there is never a good reason to shove it into the holster in dramatic fashion. Doing so risks being caught in the holster when the fight might not be over and vastly increases the risk of a self inflicted wound to the leg, foot or butt.

The Shot, Case #1
The media personality was in day two of a beginning class when she became distracted by thoughts concerning her family and job. Without thinking she failed to remove her finger from the trigger before holstering and fired a shot as she shoved her pistol into the holster. Her immediate reaction was to throw the pistol away from her, actually striking another student with it. With two holes in her upper leg she was treated on the scene and at a hospital and was back with the class for dinner that night. When asked what it felt like to shoot herself with a 9mm hollowpoint, she said it stung.

Lessons learned: Although we try, we can’t completely control the minds and the emotions of our students. Incidents like this remind us all we need to be very alert and watch carefully for signs of inattention or fatigue. We do as best we can, even though sometimes being just a couple of feet away from someone and seeing this coming is not enough to stop them in time.

The Shot, Case #2
The doctor had lots of money and not much time so he enrolled in private training. Wanting to make the most of his training time he brought several pistols to experiment with. Shortly after switching pistols he holstered with his finger on the trigger and shot himself in the leg with a round of .45ACP hardball. Being a doctor and not wanting to embarrass himself by going to a hospital he talked the instructor into letting him treat himself. Bandaging up an entrance and an exit wound he proceeded to drive himself to a colleague for treatment. On the way to his doctor friend he discovered he was leaking all over his expensive car. Further examination revealed the other two holes in his lower leg he had not been aware of.

Lessons learned: Whether a qualified medical person or not, don’t let people treat themselves or make important decisions while under stress or in shock. The doctor failed to do a complete examination, something essential with any gunshot wound. Just because you have located one or two bullet holes you cannot assume there are no others. The person shot often doesn’t feel a thing at first and is usually unhelpful in determining where they have been hit. Always insist on an examination by an impartial medical professional and never let someone transport themselves.

The Shot, Case #3
A shooter in an advanced class was feeling a little stressed due to being introduced to a drill that pushed him beyond his comfort level. Being well trained didn’t keep him from slamming his .45 into the holster with the safety off and his finger on the trigger. The full metal jacket round traveled down his thigh, making an entrance and exit wound just under the skin, made an entrance and exit wound in the calf, went through his foot, bounced off the ground and ended up inside his sneaker, intact. One shot, six holes, no broken bones. After treatment by EMS and the hospital he was able to drive himself home the next day and returned later for additional training.

Lesson learned: Even six holes from a .45ACP do not necessarily produce a devastating wound. The shooter reported no pain whatsoever for the first 30 minutes or so and afterwards described his discomfort as a throbbing low level pain. After recovering the bullet the shooter had a charm made out of it he wears around his neck, a constant reminder to pay attention when handling firearms.
An interesting fact: Having interviewed a number of people who have experienced one of these leg shots, they all reported the treatment was much worse than the gunshot. Apparently, having antiseptic flushed through a wound channel is a real eye opener.

The Shot, Case #4
A retired military officer and author was using an inside the waistband (IWB) holster in class. Getting a bit ahead of himself, he shoved his pistol into the holster without first having taken the precaution of getting his finger clear of the trigger. The resulting gunshot didn’t hit anything vital but seriously wounded his pride.

Lesson learned: If you want to shoot yourself in the butt during training an IWB holster is the way to do it, as the muzzle generally ends up pointed at your posterior. Great care needs to be taken when holstering with an IWB holster; some instructors do not allow them during training.

Prevention
Okay kids, here’s how all of us, whether shooters or instructors, are going to eliminate these things from happening during training:

1. Never, ever speed holster or allow it during training.

2. Always follow a post shooting sequence. Come to a low ready position with finger off the trigger, look around (make sure the bad guy is through being bad or doesn’t have friends), reload as needed (you don’t know if the fight is over and need to be ready for whatever may happen next), reset the safety or de-cock, take a BIG BREATH, and holster SLOOOOOWLY.

3. By holstering slowly and carefully you will avoid hooking the trigger on holster parts or clothing, something you can’t stop if the pistol is slammed into the holster. While holstering, if you feel resistance, STOP.

Follow these steps yourself, make all who shoot with you follow them, and we’ll all be safer and better prepared for the real thing.

Gun On A Rope 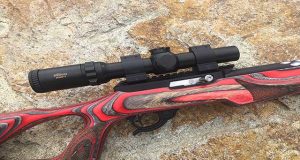