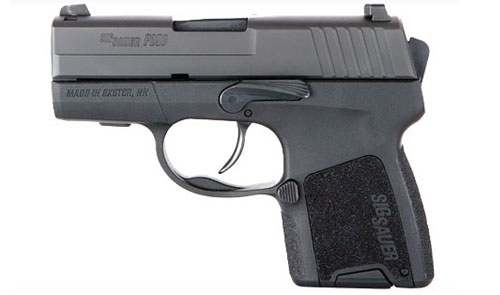 Pocket pistols are all the rage these days for people concerned with concealed carry. This trend got started with the revival of the .380ACP as a popular carry cartridge and it didn’t take long for manufacturers to realize they could make a 9mm in a similarly small and popular platform. This is a good thing for defensive shooters because there are more pistols to choose from than ever before and the competition to sell these small pistols means the quality and reliability keeps right on improving. In the not-too-distant past if you wanted a small, concealable semi-auto pistol there were few choices, many of them poor, as the quality of some of the available pistols was pretty bad.

This brings us to the Sig Sauer P290, a 9mm sub-compact pistol entirely suitable for concealed carry. The 290 is offered in six variations, to include different finishes on the stainless steel slides, but all of the pistols share the same polymer frame and double action only (DAO) trigger. The 290s come with SIGLITE night sights and can be equipped with a laser module that attaches by a clever arrangement to the dust cover portion of the frame that eliminates the bulk associated with a rail attachment system. The pistol ships in a lockable carrying case and includes a 6 round magazine with a small pinkie rest, a replaceable flat magazine base pad, an extended 7 round magazine and a Sig marked plastic holster made by Fobus. Other than ammunition, you have everything you need for concealed carry.

Weight is an important consideration with carry pistols. To test whether a pistol is too heavy, drop it in your wife’s purse and see what she has to say about toting it around. Generally, lighter is better but we can reach a point of diminishing returns. Again, using the Domestic Goddess (DG) as an example, hand her a 13 ounce .357 Magnum snubbie to shoot and get back to me if you survive the experience. The Sig P290 comes in a few ounces heavier than several of the newer 9mm sub-compacts. I like to weigh pistols loaded – because that’s the weight we’re going to experience when carrying them – rather than relying on the unloaded weights generally listed in the catalogs. According to my scale, the P290 weighs 23.6 ounces with a loaded 6 round magazine and a round in the chamber. Comparing this to a few other popular sub-compact nines, the Kahr PM9 comes in at 19.3 ounces, the Kimber Solo at 20.3 ounces and the Ruger LC9 (with Crimson Trace Laserguard) at 20.3 ounces.

Field Stripping
When writing up a gun test this is the point where I would normally say the P290 is field stripped by following the four simple steps on page 36 of the instruction manual. Reassembly is, of course, in reverse order. The trouble is, if you follow the instructions in the manual you may not get the 290 apart. After struggling with the little pistol for half an hour of sweating and cursing as per the instructions I retreated from the shop and took my sore hands inside for a beer. Fortunately, the Internet is your friend and a search of You Tube quickly produced a short video showing an easy way to field strip the 290:

I spoke with Tim Butler, Sig Sauer pistol product manager, and he endorses this disassembly method. He also said he will be re-writing the instructions in the manual and explained the manual is a little behind development of the P290 because the pistol has been modified from the original design several times this year. This is a good thing, as it shows Sig is committed to product improvement. Speaking of continuing improvement, Tim told me Sig will soon be offering thicker replaceable grip panels for the P290 to help shooters with big hands get a grip on the little pistol.

At The Range
As I have come to expect with Sig Sauer products, the little 290 functioned flawlessly during a morning range session. I have a “junk” bag of 9mm ammunition that consists of odds and ends of a variety of ball and hollowpoint ammo and all of it ran through the 290 as I randomly loaded it into both the standard and extended magazine. In addition, Remington and Federal defensive ammunition loaded with 115 and 124 grain bullets, as well as some +P+ 9mm, fired without a hitch. The sights offered an excellent sight picture and seemed well regulated back to 15 yards. At reasonable defensive distances for a pocket pistol I had no trouble coming out of the holster quickly and firing pairs, hammers and failure drills (two shots to center mass followed by a head shot).

The double action trigger recorded an average of 8.5 pounds on my Lyman electronic trigger pull gizmo but it feels lighter than that. The trigger has a long way to go and I found that working it quickly to the rear worked out better for me than taking it back slowly or trying to stage it. Just line up the sights with a firm grip on the pistol and stroke the trigger to the rear. The trigger also has a long way to go when moving forward to reset. Having recently tested the Sig P226 with the Short Reset Trigger (SRT) I think it would be great if the little P290 had the SRT as well. The P290 fires from a hammer, not a striker like many little pistols, and has a second strike capability, meaning if the pistol doesn’t fire you can try pulling the trigger again, much like a revolver. Far better, in my opinion, to perform an immediate action drill than to keep pulling the trigger if the pistol doesn’t fire, but that’s another topic for another time.

Overall, the Sig Sauer P290 is pleasant to shoot. Having shot a bunch of the really lightweight .380ACP and 9mm sub-compact pistols in the past couple of years, I can tell you that shooting some of them is unpleasant. Being the sensitive guy that I am I appreciate the fact that the P290 is a bit heavier than some of the breed and this translates into shooting comfort. Keep this in mind when buying a carry pistol for the DG if you expect her to practice with it.