I mean, who can oppose universal background checks? Well, me for one, but as I live in a UBC state, Colorado, it doesn’t make any difference.

However, in the fight against UBCs in Colorado in 2013, we all learned a lot about the concepts of universal background checks, and virtually all of it is bad. For a start, UBCs really aren’t really designed to do what they say, that is, provide for a background check for every firearms sale. Rather, UBCs are designed to “criminalize” actions that we in the gun culture take for granted and are of quite literally no consequence.

The best way to sum up UBCs is that they are designed to change the definition of possession of a firearm from the current definition used by BATFE and pretty much everyone with more than three working brain cells — “ownership” — to “physical possession” of the firearm. Here’s how that would work under the UBC rules as drafted by Michael Bloomberg’s “law fare” group (which we were able to prove in Colorado).

I own a firearm, say a nice Glock 19. I know I own the firearm because 1) I paid for it and 2) it was transferred to me by an FFL dealer. You drop by the Secret Hidden Bunker and, in the course of the conversation, you ask to se my new Glock 19. Sure. I take it out of the safe and hand it to you. You ponder it for a few minutes, say, “Wow! It’s a Glock!” and hand it back to me.

Under sane laws, there was clearly no transfer of ownership of the Glock 19. I did not offer to sell it to you; you didn’t not offer to buy it; no filthy lucre changed hands. However, under the universal background check proposals that are being tossed around, in the above situation both my guest and I would be guilty of federal felonies:

Ridiculous, right? You betcha, but that is the real reason universal background checks are so dangerous. Think of how many time you have handled a gun that wasn’t yours, maybe at a match, maybe in a hunt camp, maybe because a friend was desperately in need of a self defense firearms. Those are everyday occurrences in our world, and, once again, are of no consequence whatever.

So why would a UBC law be so worded? Because it is specifically designed to be a weapon to damage or destroy our culture, to make owning a gun harder and more legally dangerous to the owner.

It gets worse…much worse. The original Bloomberg-drafted law was so broad that even if you have a person house-sitting, or you are military and deployed, and your guns are all in a safe where the person minding your house does not have the combination, an illegal transfer — one for every gun in the safe — is deemed to have taken place. Notice that there has been no change in ownership and, in fact, the person minding the house does not have access to the guns…just by being on the property of the gun owners, the house-minder is now guilty of a federal felony.

Let’s say you and your spousal unit are not married but share a home…while you are not home there is an attempted break-in and your spousal until picks up the bedside gun to defend himself or herself. Well, if the gun is yours, that is, if it was transferred to you through your FFL or has been in your ownership for a long time, your spousal unit is guilty of a federal felony and could well do more time in the slam than the person breaking in.

The message in the universal background law proposals is that firearms are so incredibly dangerous and scary that they must be regulated at an unprecedented level, with an equally unprecedented level of intrusion into peoples’ personal lives.

So what about those polls, the ones that show everyone in America wants background checks? Well, a zillion years ago when I was in college, my major professor has dual PhDs in Mass Communications and Statistical Analysis. In order to pass his advance class, I had to create an “objective” survey to be sent out to students, compile the results and present them to the professor. The catch was I had to present the results in advance of sending out the survey. It looked like an objective survey, but it was designed from the ground up to get specific results. I set the curve with an A+.

If some stupid college student could do that, imagine what the professional pollsters can do! The short answer to the polls is how the question is asked. Generally, it is asked in these kinds of terms: Do you favorite a background check on all gun sales? Yeah, sure. But if the question is expanded to should you be able to give a gun to someone in your immediate family, loan a gun to a good friend for a hunting trip, try a friend’s gun at the range, etc., the “consensus” collapses.

Secondly, we heard endlessly during the Colorado battle that 40% of all firearms sales did not pass through an FFL dealer. This number was repeated ad nauseam on television, in the newspapers, on the Internet and on the floor of the Colorado Legislature. It seemed reasonable to us to ask where the number came from. All those voices shut up. Here’s why, from FactCheck.org, hardly a conservative house organ:

“But that figure is based on an analysis of a nearly two-decade-old survey of less than 300 people that essentially asked participants whether they thought the guns they had acquired — and not necessarily purchased — came from a federally licensed dealer. And one of the authors of the report often cited as a source for the claim — Philip Cook of Duke University — told our friends at Politifact.com that he has “no idea” whether the “very old number” applies today or not. Even Vice President Joe Biden acknowledged that the statistic may not be accurate in a speech at a mayoral conference on Jan. 17. Biden prefaced his claim that “about 40 percent of the people who buy guns today do so outside the … background check system” by saying that ‘because of the lack of the ability of federal agencies to be able to even keep records, we can’t say with absolute certainty what I’m about to say is correct.'”

In other words, the 40% number, which is still being batted around today, is total bullshit. The Colorado Bureau of Investigation laid on extra workers to handle the anticipated 40% increase after the law passed.

But…wait for it…wait for it…nothing happened. the real number of private sales was closer to 2-3% than the 40% lie. Most private transfers take place inside of families, which was carved out in the Colorado and which is carved out in the proposed national bill. The vast majority of firearms sales in the country, as many as 98%, already go through FFL dealers. You cannot buy guns on the Internet without the gun being delivered through a dealer. There is no “gun show loophole.” Private sales used to be a bigger thing. But as the hammer of liability laws has loomed larger and larger, private sales have dropped to a very small percentage of the overall number.

Finally, we come to the real reason the Left so badly wants universal background checks:

The system as described in the bills will not work without comprehensive, universal firearms registration.

The goal of a UBC is that the feds will know every time a gun changes hands, to track the movement of guns. But that information is fundamentally worthless if the fed doesn’t know where all the guns started their movement.

Here is the way that it will happen:

• That data will likely be tossed into the Memory Hole, and the feds and the political stooges will announce that the real purpose of the UBC is to track the movement of guns so that the FBI can swoop in on the domestic terrorists and insurrectionists.

• Then, predictably, the FBI and their political stooges will announce that they can’t do their job of interdicting domestic terrorists and insurrectionist by trancing gun movements unless they know where every gun in the United States, be it 200 million or 400 million or a billion zillion guns, is right at this moment. If there were only a database of all the guns in America, the FBI could track down all the domestic terrorists and insurrectionists, for sure this time!

• Creating that database will require a bit of help from all the other acronym agencies and the Tech Oligarchs, but hey, it’s an EMERGENCY…violent domestic terrorists and insurrections are on the verge of overthrowing the duly elected socialist government of the Former United States of America…emergency measures have been declared. And when there’s an EMERGENCY, when emergency measures have been declared, Americans will queue up to surrender their rights, a la COVID-19. As you may remember from high school, “But it was alright, everything was alright, the struggle was finished. He had won the victory over himself. He loved Big Brother.”

• Then, after an amazingly short period of time, all the political stooges will line up and chant in unison that the FBI’s magnificent database had failed, not because the FBI wasn’t super magnificent, but because there were just too many guns! Hmmmmmm…how might we fix that?

• Confiscations begin. If you’d like to know how that will happen, I refer you to Matt Bracken, author of the Enemies Foreign and Domestic trilogy, which is pretty much shaping up to be future history: “Team Tyranny won’t need to conduct many door-to-door gun raids. They’ll just lock you inside a digital gulag in your own house.”

All gun registration always lead to confiscation. That is the only reason for registrations in the first place. The reason the Left keeps chanting about universal background checks, even though there is no rational reason for such beyond what we already have, is because they represent a crucial first step to “groom” the nation for confiscations, the same way certain non-white parties in the United Kingdom groom you girls, and for the same reason.

We’re going to get screwed. 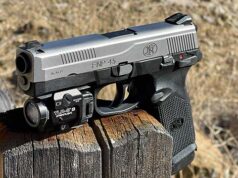 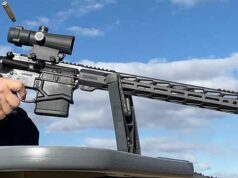 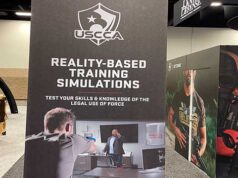