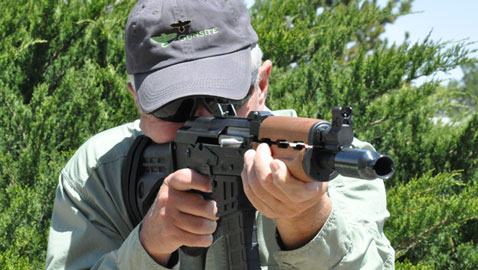 These days we would refer to Mikhail Kalashnikov as someone who had “been there and done that”. He fought with the Red Army against the invading Germans during World War II and was severely wounded in the process. Kalashnikov had an intimate knowledge of “war in the mud”, the Russian concept of employing weapons that are robust and easy to use under the most adverse conditions, and his assault rifle design reflected these ideals. It would go on to become the most prolific military rifle ever, especially in Third World countries where training is limited and concepts like weapon cleaning and maintenance are unheard of. The rifle, of course, is the AK-47.

As I wrote earlier the Zastava PAP M85 NP I bought at J&G Sales is different and unique among AK variants because it’s chambered in .223/5.56 NATO ammunition that feeds from standard M-16/AR-15 magazines. First, I tested the pistol for reliability with a mix of ammunition from various manufacturers and every type of AR magazine I had. Exceeding my expectations, the pistol functioned flawlessly. Next it was time to test accuracy. 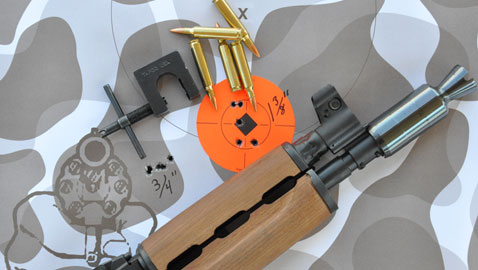 I rested the pistol on sandbags and fired 5 shot groups at 25 yards. Not expecting much, because the Krinkov style iron sights don’t exactly offer a precision sight picture, I was surprised to find I could consistently shoot groups in the 1 – 1.5” range with some going under an inch. Using a Tapco sight tool, I adjusted the front sight for both windage and elevation to achieve a 25 yard zero. Speaking of sights, for quick shots at close ranges I found centering the target in the semi-circular front sight wings was sufficient for making quick “minute of bad guy” hits on silhouette targets. Adjusting the front sight to zero the pistol may seem backwards, but you move the front sight left for moving the group to the right and down (clockwise) for moving the group up.

One of the things that appealed to me about the M85 was the availability of an arm stabilizing brace called the SB-47 produced by Century Arms International, the outfit who import the M85. Designed to assist handicapped shooters in shooting a rather large, heavy pistol one-handed, these devices are becoming increasing popular accessories for AR and AK design pistols. As I understand it, the Bureau of Alcohol, Tobacco, Firearms and Explosives (BATFE) has determined that attaching one of these arm stabilizers to a pistol does not constitute the making of a Short Barreled Rifle (SBR). Buying or making a SBR requires federal paperwork and the payment of a tax to the government. This law dates back to the mid-1930s and makes SBRs akin to short-barreled shotguns and machineguns. The BATFE are known for ruthlessly enforcing the law restricting SBRs so gun owners are understandably wary of provoking them by intentionally or inadvertently possessing an SBR. However, having ruled that the arm stabilizer is not a rifle stock and approved their attachment to AR and AK pistols, BATFE have left the matter of how they wish to hold or shoot their pistol up to the individual. In other words, if you want to use the arm stabilizer like a shortened stock, and shoot the pistol from the shoulder, it’s okay, and it works very well in the case of the M85 with the SB-47 brace. Fired this way, the stabilizer really does stabilize the pistol, especially when firing multiple shots. 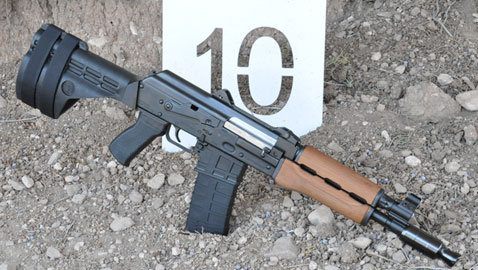 The brace is attached to the pistol by simply unscrewing the bolt at the bottom of the pistol grip, inserting the two metal “forks” on the front of the brace between the pistol grip and the frame and tightening the bolt. While I was at it, I changed the pistol grip to a Hogue rubber grip I found among the extensive number of accessories available for AK rifles and pistols offered by Brownells, my favorite mail order gun parts source. Adding the brace brings the overall length of the M85 pistol to 29.5 inches and increases the unloaded weight to 7 pounds, 13 ounces. Like most AKs, the SB-47 stabilizer has some sharp edges. When I get the time I plan to knock some of these edges off, and although it might not be pretty, hey, it’s an AK. 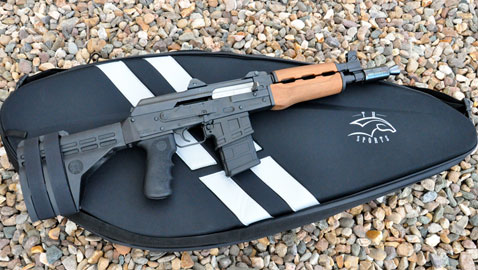 Thinking the M85/SB-47 might be a handy truck gun, I ordered a Trojan Horse long gun concealment case, also from the Brownells catalog. The Trojan Horse case is a semi-hard case designed to look like a case that might be carrying a musical instrument or a couple of tennis racquets instead of a gun. It’s the perfect size for the M85 pistol and has room for spare magazines or other accessories.

Finally, we arrive at the question of what the M85 pistol is good for. With the abundance of accessories available for AKs it can be set up in any number of ways to suit different roles. For example, I’m considering screwing a small section of rail to the wood forend and attaching a Streamlight TLR-2 G weapon light with a green laser to set the pistol up as a home defense gun. As I mentioned, especially when stored in the Trojan Horse case, the M85 is an excellent truck gun. Best of all, it’s fun to shoot, but inevitably it begs comparison to an AR carbine or pistol. There are two primary differences, those being weight and cost. The M85/SB-47 is a compact package, several inches shorter than a 16” barreled AR with the stock collapsed – and about the same size as an AR pistol – but it is a couple of pounds heavier. The cost difference between an AR carbine or pistol and the M85 is significant, something like $300-$500 or more. I guess it comes down to your preferences, as among shooters there is the AK crowd and the AR crowd and the two can argue endlessly about which system is better without ever coming to agreement. It’s kind of like Ford vs. Chevy.

Kalashnikov’s marvel, the AK-47, has endured for more than 60 years while proving itself to be versatile, durable and brilliantly simple. If my M85 is representative of the breed I should be able to use it, abuse it and shoot it a long time without cleaning. After all, as Boris told me, “Vhy vould you?”