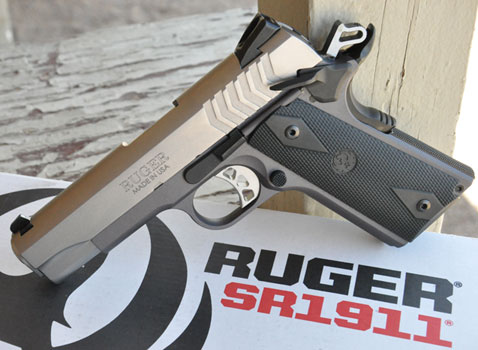 Back in the Dark Ages when the Domestic Goddess (DG) and I were dating my friend Don had a 1947 Harley Davidson. The DG was used to riding around on the back of my Honda and didn’t have much regard for the antique Harley until the day she was offered a ride. To say she enjoyed the experience would be an understatement. As Don said, “It only takes once.”

Why do I bring this up? Well, the DG likes to shoot and her pistol of choice is a 1911 chambered in 9mm. When folks question why she prefers this old fashioned gun rather than a modern, plastic pistol she simply hands them her pistol and says, “Try the trigger.” In every case the skeptic concludes the trigger on her pistol is perfect. The DG smiles and says, “It only takes once.” So there you have it, the number one reason for shooting a 1911 – it’s that perfect trigger. As someone who has taught many thousands of people to shoot it’s been my experience that almost every one of them can shoot a 1911 better than most other pistols and the main reason is that wonderful trigger.

The folks at Ruger understand this and it might have something to do with why they started their SR1911 series of pistols several years ago. Beginning with a full size pistol, followed by one in Commander size, then a Lightweight Commander version, all chambered in .45 ACP, the latest in the series is here now; the SR1911 LW CMDR in 9mm. I’ve been shooting various versions of this pistol for a couple of years. I was perfectly happy with the first one but the Ruger people wanted to make some changes so they made me give it back. By the way, if you’re a collector and wondering how to get your hands on one of these prototypes, give up. They go back to the factory and after further testing the pistols are destroyed. 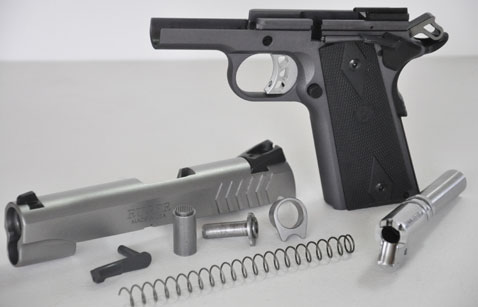 When Ruger developed the LW CMDR in .45ACP they realized that hollow-point ammunition could damage the feed ramp portion of the aluminum frame over time so they added a titanium insert to the feed ramp. They went another direction with the 9mm version that uses a ramped barrel. It eliminates the feed ramp issue and improves feeding with a variety of ammunition. Aside from the ramped barrel, if you’re familiar with a Lightweight Commander 1911 you will be completely familiar with the new 9mm version. The Rugers use the so- called “Series 70” firing system, meaning there is no firing pin safety. One isn’t needed because the pistols come with an extra-power firing pin spring and a lightweight titanium firing pin, all to prevent firing pin bounce from firing the pistol if dropped onto a hard surface muzzle first. The recoil spring guide isn’t elongated; it’s the size the Sainted John Moses Browning designed it to be In The Beginning. The barrel and barrel bushing are machined together from the same piece of steel and provide a fit and quality rivaling expensive “match grade” components. If you look carefully you will notice one departure from Saint John’s design. Like the other pistols in the SR1911 lineup the new pistol doesn’t have a staked on plunger tube; it’s an integral part of the frame that will never fall off or need to be re-staked.

The manufacturing process at the Ruger factory in Prescott, Arizona is state-of-the-art. The production line consists of two long rows of CNC and wire EDM machines tirelessly producing precision parts. The various parts arrive in an assembly area where checks such as trigger pull are tested on a computerized fixture then the pistols roll away on carts a short distance to the indoor range for test firing. From there the pistols go to a shipping area where they are cleaned and packaged then onto trucks for shipment. Ruger is rightly proud that these pistols are 100% made in the USA.

The sights are the excellent Novak Lo Mount sights; in my opinion the finest pistol sights extant. The sights are the popular three white dot variety and they reside in genuine Novak dimensioned sight cuts. Personally, I dislike sights with white dots; my preference is for a plain black rear sight with Novak’s extra-wide sight notch and their gold dot bead front sight. Should you agree with me and want these sights, or night sights or any of the other available options you can easily have the sights changed by your local gunsmith or by Novak’s.

The new 9mm is an attractive pistol with a different appearance from others in the SR1911 lineup. While the lightweight .45 ACP pistol has a blackened aluminum frame the frame of the new pistol is a grey color. The grip safety, slide stop, thumb safety and other steel parts are blackened and this provides a visually interesting contrast with the grey frame and stainless steel slide. The cocking serrations at the rear of the slide are distinctive, being a series of chevrons rather than the slanted parallel lines found on the other SR1911s. Lastly, the stocks are double diamond checkered rubber (Hogue?) that look like the ones we first saw on prototype SR1911s before the switch to wooden stocks. These features set the LW 9mm apart from others in the SR1911 lineup. It’s a good looking pistol.

How does it shoot? To find out you’re going to have to wait for Part 2 of my report. I fired more than a dozen different loads in the new Ruger and while everything went about as I expected there were some surprises you’re going to find interesting. Oh, and the trigger? It breaks crisply at just over 4 pounds after a tiny bit of creep. It’s a very good trigger and I expect it will improve a little with use. Stay tuned.