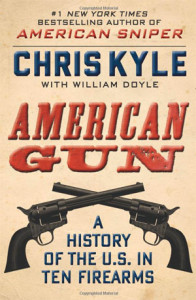 As I’m sure you know, Chris Kyle was an American hero of the highest order.

Recounted in his earlier book, American Sniper, Kyle served four tours in Iraq with the U.S. Navy SEALs. Highly decorated, he became known as The Legend and was the most lethal sniper in U.S. military history. Kyle was murdered earlier this year, but not before finishing most of the work on his second book, American Gun. Completed by his wife Taya, this book was released on June 4th and comes as a pleasant surprise.

American Gun is an easy and enjoyable read. It’s written conversationally and feels as though Kyle is sitting down with you, having a beer and telling stories. Kyle takes us through events in American history where ten guns he has identified played an important role and influenced American history.

Kyle’s list of guns are: The American long rifle, the Spencer repeater, the Colt Single Action Army, the Winchester 73, the 1903 Springfield, the 1911 pistol, Thompson submachine gun, M-1 Garand, the .38 Special revolver and the M16 rifle.

The development and history of each is explained and several examples of their use in shaping American history are given. Although you may not agree with Kyle’s list, whether an experienced shooter or one of the gun owners who have joined our ranks in recent years, you’re going to learn something and enjoy reading about each of these guns.

As Kyle says in the introduction: “More than any other nation in history, the United States has been shaped by the gun.” After reading American Gun I think you will come to the same conclusion.