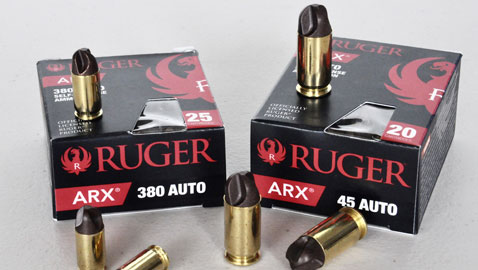 As shooters we concern ourselves with bullet weight and muzzle velocity but RPM – revolutions per minute, the rotational speed of the bullet, usually isn’t part of the discussion. Did you know pistol bullets spin at 60,000 to 90,000 rpm or more? That’s pretty fast but nothing compared to rifle bullets that can reach a rotational speed of 300,000 rpm. So hold that thought, we’ll get back to it in due course.

Ruger has teamed with PolyCase ammunition to produce a new lineup of Ruger branded pistol ammunition. Based upon the ARX frangible bullet, this ammunition is unlike anything else on the market. The odd shaped bullet looks like a round nosed full metal jacket bullet that has been modified with three sections scooped out. While the bullets are copper colored and have the appearance of a jacketed bullet they are actually injection molded copper particles combined with an epoxy-like material. Having no lead in them, the bullets are lighter than standard projectiles and can be driven at much higher velocities. If you’re familiar with frangible ammunition – the stuff we use in indoor ranges, for close range shooting on steel, or the simulators at Gunsite – you might be wondering what’s special about this new ARX bullet. After all, frangible ammo uses a lightweight bullet made of compressed particles driven at higher than normal velocities designed to break up when it hits a hard surface like a steel target and usually penetrates like crazy in tissue or ballistic gelatin.

What makes the ARX bullet different from regular frangible ammunition is its construction. It’s a harder bullet that doesn’t break up as easily as the frangible bullets I’m familiar with and those scooped out sections of the bullet do a couple of things that make a difference in creating huge temporary and large permanent wound cavities in ballistic gelatin, and presumably, flesh and blood, all without expanding like conventional hollowpoint bullets. As the bullet spins (remember that high rotational speed we were talking about?) it throws out a shock wave and displaces fluids and soft material. The folks at PolyCase say the velocity of the displaced material being spun off the bullet is somewhere around more than twice the velocity of the bullet. That means, in the case of the .45ACP ARX bullet I chronographed at 1350 feet per second (fps) the “spin off” from the ARX bullet is going to be something like 2700fps. Think of a very high-speed auger or drill bit and you’ll get the idea. In addition, this spin and velocity causes the ARX bullet to displace material forward in kind of a bow wave effect. As the bullet slows and stops spinning, in many cases it will tumble and carry on in a base forward position until it stops or exits.

If I may digress, if you’ve known someone who served in World War II or Korea they may have told you some interesting stories about the stopping power of the .45ACP military hardball round fired in the 1911 pistol. In many cases the exit wounds were described as “being as big as your fist”. When I heard these stories I accepted them as gospel but had no idea what caused these wounds. Later on I discovered the old boys knew what they were talking about, as extensive wound ballistics research conducted by Dr. Martin Fackler and others revealed that .45 ball ammunition was designed to swap ends and exit base first, with that large, flat surface causing the big exit wounds people spoke about. John Moses Browning knew what he was doing when he designed the .45ACP. Back to the ARX bullet, what we seem to have here is a bullet with a round nose profile so it will feed and function in any pistol, that penetrates like a ball round, produces large wound channels like a hollowpoint and tumbles like a .45ACP hardball bullet. I’ve read reports indicating these bullets perform very well in the FBI testing protocols where clothing, glass and other commonly encountered materials are placed in front of the ballistic gelatin.

I’ve been doing a lot of research on this ammunition by looking up information on the ‘Net, watching videos of ballistic gelatin tests and reading the few magazine articles that have come out so far. Lacking a ballistics laboratory and not wishing to repeat tests others have done (one guy shot up cans of nacho cheese dip; very entertaining) I decided to chronograph the two loads I have at hand and shoot up a 1985 Ford truck while comparing the Ruger ARX ammo to a couple of other premium loads. Here’s what I found out: 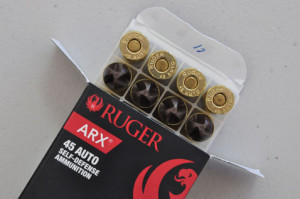 The .45 Auto ARX loads come 20 to a box, have a brass case and the bullet weighs 114 grains with a muzzle velocity of 1350fps producing 461 foot pounds of energy. I chronographed the .45 Auto load in a Ruger Commander-size 1911 and a full size Smith and Wesson M&P and found the average velocity of the ammunition was right on the money at exactly 1350fps in the M&P and 1326fps in the Commander. I compared the ARX load to Cor Bon DPX 185gr. +P jacketed hollowpoints and Hornady Critical Defense ammo with a 185 grain FTX bullet. As far as shooting the truck was concerned I could tell no difference in these loads. All three punched right through double layers of sheet metal, making big holes, and continuing on their merry way. It takes more than heavy sheet metal to stop these bullets, including the frangible ARX. As far as recoil and subjective feel was concerned all three feel about the same in full size pistols, with the ARX feeling slightly milder. 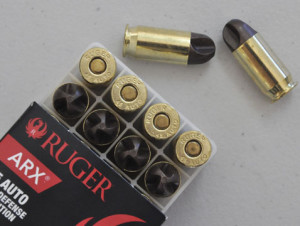 The .380 Auto ARX ammunition is packaged 25 to the box, has a brass case and the bullet weighs 56 grains with a muzzle velocity of 1315fps producing an initial energy figure of 215 foot pounds. Chronographed in the short barreled Ruger LCP the ARX load launched at an average of 1272fps and 1286fps from the slightly longer barrel of a Colt Mustang. I compared the ARX to the Hornady Critical Defense 90 grain FTX load and the Sig Elite Performance 90 grain JHP. 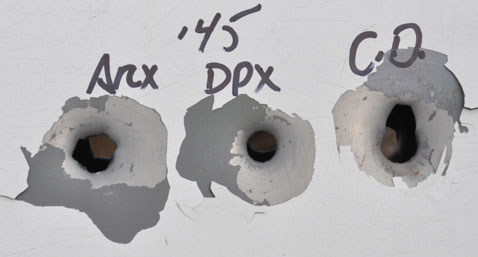 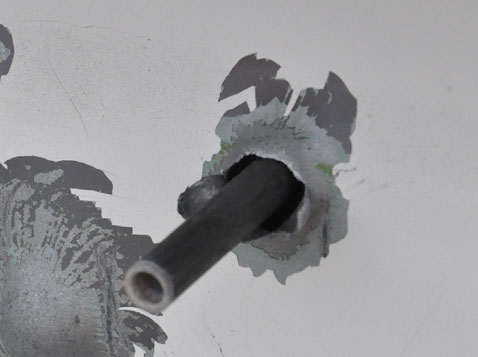 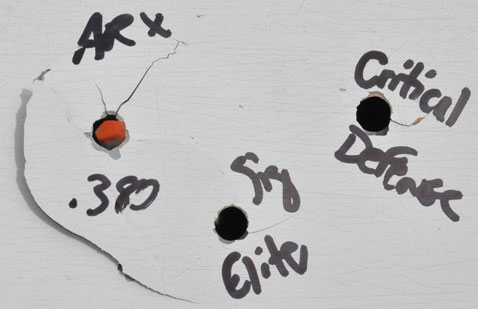 While all three loads punched through the hood of the truck, to my considerable surprise, only the ARX load made it through both layers of steel comprising the sidewalls of the truck bed. The ARX load was the most comfortable to fire in the little pistols. I also put an ARX round through the windshield and did a slo-mo video to give you an idea of how much glass gets blown into the passenger compartment when a bullet, even one as small as a .380, comes through the windshield. You might be surprised by the results:

Unless someone wants to help me out by providing a dozen ISIS fighters I can use as ballistic test material we’re going to have to wait and see how this ammunition performs in the real world as fight stoppers. As far as I can tell, it appears to do very well but the jury is out and I expect this new ammo from Ruger is going to be the subject of many heated discussions among shooters. In the meantime, I wouldn’t be a bit surprised if the U.S. military selects the ARX ammo for their new pistol. We’ll just have to stand by and see what develops.

There’s a lot of information on this ammo at:

Ed Head - March 2, 2016 2
Ed Head tested the Ruger ARX ammo at long range with the new Ruger American Pistols. Did they perform out to 100 yards?