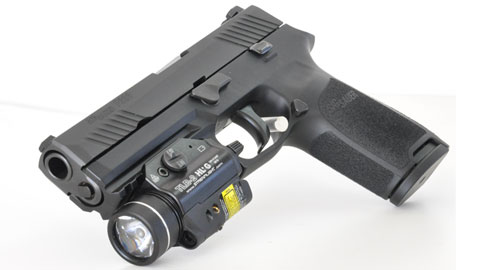 Am I afraid of the dark? Well, no, I don’t think so. But you might get a different impression if you looked around my house and saw the flashlights scattered about. The fact is, I’m something of a light junkie, an addiction I picked up wandering around in the dark hunting bad guys for many years and usually wishing I had a better or more powerful light. Fortunately, with LED and digital technology the lights we can choose from now are more powerful, with more features and better battery life than anything I could have imagined or wished for “back in the day”. Streamlight, a leader in the field, has some new products I would like to tell you about, so let’s get started. 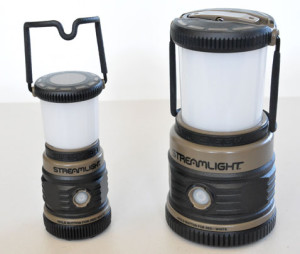 Do you remember using a lantern that required “white gas” fuel and used those cotton mantles that fell apart when you touched them? Listening to the colorful language my father and uncles used while pumping up and trying to light the lantern during family camping trips probably warped my young psyche and led to my eventual fascination with firearms. Happily, those days are over and we have two wonderful, battery powered, LED lanterns to talk about. Both use three batteries, the original, and larger Siege in D cell and the new, much smaller model in AA. Both have three white light power levels and can be switched to red light, as well as a flashing SOS pattern in red that will run for hundreds of hours with a fresh set of batteries. The D cell Siege has a top power level of 340 lumens for a 30 hour run time and the AA model puts out 200 lumens at full power for 7 hours. The lanterns float, are reasonable water and shock proof, have hangers on the top and bottom and the globe can be removed if you wish to hang the lantern upside down as a tent light. Either one will light up a room, cabin, barn or tent, provides a nice light on the patio table in the evening and is bright enough to read with. The D cell model weighs 30 ounces while the AA version weighs a scant 8.9 ounces, meaning no backpacker should be without one. Throw away the candles, buy a couple of these lanterns and some batteries and you’ll be ready for the next power outage or siege. 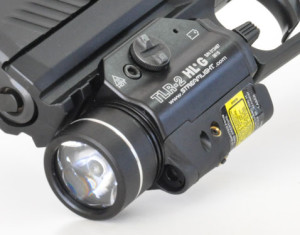 We used to go out and hunt border bandits with mini flashlights clamped to the gun barrels. Don’t laugh, it was serious business, dangerous as hell, and that’s all we could come up with for weapon lights, pathetic as they were. Fortunately, modern police and military personnel are equipped with state of the art weapon lights, many incorporating lasers, and these same lights are available to armed citizens. Personally, I keep weapon light/lasers on my home defense firearms and recommend you do the same. The latest from Streamlight is their TLR-2 HL G, a blazing 720 lumen weapon light combined with a green laser that can be mounted on the Picatinny rails of pistols, shotguns or rifles. The light will run for 1.5 hours, the laser for 17 hours on two CR 123 batteries and it can be set up for laser or light alone or a combination of the two as well as a strobe function. This one is going on my bedroom pistol. 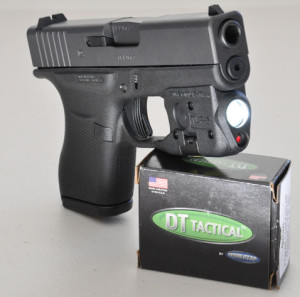 With the popularity of the Glock 42 in .380 and the Glock 43 in 9mm is it any wonder companies are coming out with accessories? Not to be left behind, Streamlight has introduced their TLR-6 light/laser specifically for the mini-Glocks. It’s a small, slick unit that adds very little bulk to the pistol and clamps to the front of the squared trigger guard. The LED light puts out 100 lumens for 1 hour. With all the high powered lights available these days 100 lumens may not seem like much but I can assure you it is more than enough to identify a threat at conversational distances. Considering the first “combat lights” put out 60 lumens and ran for only 20 minutes, a 100 lumen light that will run for an hour, AND combines a red laser and fits on a tiny pistol is quite an accomplishment. Like the other lights in the lineup, the TLR-6 can be set for light or laser only or a combination of the two. It’s small and light enough to use for concealed carry on the baby Glock – I’m having a concealed carry holster made for it and plan to do a full report on the tricked out G43, so stay tuned. 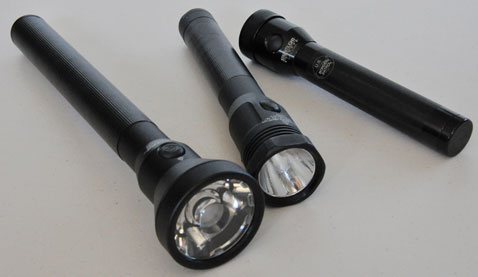 While an improvement over most of the lights we had, the Stinger rechargeable flashlights the Border Patrol issued to us way back when had some drawbacks. I’ve never been a big fan of adjustable beam lights, as they always seem to have dark spots in the beam and are never adjusted just right when you need them. While they seemed to have decent light output at the time, I charged up an original Stinger to compare with the new ones. I guess I’m spoiled because the incandescent beam of that old light looks pretty sad now. Streamlight now has an entire lineup of Stinger rechargeable lights including my two favorites, the Stinger HL that puts out 1,000 lumens and was my go-to outdoors light until the newest Stinger came out, the incredible Ultrastinger with a searing 1,100 lumen focused beam that can reach out more than 500 meters. If I was back on patrol the Stinger HL would be my choice of light to hang on my belt and I would keep the Ultrastinger in the truck for use as a spotlight. Since I’m only a homeowner who lives out in the country now I keep the HL as my bedroom flashlight and the Ultra is the Stinger I keep in the kitchen. I can take either light outside and they will light up everything I need to see on my 4.5 acre ranchito. Both lights are programmable but I’m kind of a simple guy and features like “on” and “off” suit my needs. Should I need to stop a bad guy in his tracks or spot a coyote loping through the brush 300 yards out, the big Stingers with their focused LED beams and incredible light output are just the ticket.

So, no, I’m not afraid of the dark. With products like these available from Streamlight, you have no reason to fear the dark either.