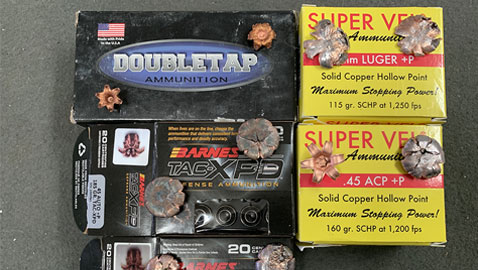 Nobody likes to get shot with anything. Be it BB guns or cannons people have an aversion to being shot and usually reconsider their evil activities after one helping. The reason for shooting someone is to make them stop doing whatever it is they were doing that makes it necessary to shoot them. From committing arson to murder the objective is to make them stop – now! We call it using deadly force because it may result in the death of the bad guy but that’s not our objective- we’re trying to get them to stop.

Rifles and shotguns are far more effective in stopping bad behavior than handguns but are much less easily carried and concealed so handguns are the default defensive firearms in most cases. Being less effective we have to be concerned with a term loosely defined as stopping power, or what does it take to get someone to stop? By far the most common reason is a psychological stop – the bad actor didn’t like being shot – but what does it take to make someone stop involuntarily?

In the late 1980s the FBI convened a panel of experts to address this issue after the disastrous Miami Shootout where a couple of really bad guys wrecked a team of FBI agents. A star in the field of wound ballistics arose from this conclave as Dr. Martin Fackler set the standards by which all handgun ammunition is measured. Fackler’s research showed that there are two major factors in bullet effectiveness, those being how deeply the bullet penetrates and how large a permanent wound cavity it creates in living tissue. These days every maker of defensive handgun ammunition endeavors to satisfy the FBI standards of penetration and expansion. Unfortunately, penetration and expansion are two mutually exclusive goals. Non-expanding bullets can be made to penetrate very deeply while expanding bullets limit penetration.

Traditional defensive bullets are mostly made of lead with a copper jacket and a hollow cavity in the nose. Referred to as hollowpoints they are the universal choice of law enforcement and those seeking effective defensive pistol ammunition. However, we also have solid copper hollowpoint bullets to consider, and I have to tell you, I’ve become quite a fan. Let me tell you about some of them. 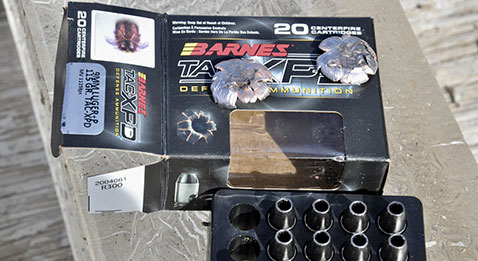 Barnes Bullets, now part of the Remington conglomerate, was the first ammunition company to produce copper hollowpoint ammunition. In 1979 they produced an expanding copper rifle bullet they called the X bullet. In 1993 the XPB pistol bullet came out and we now have the latest variation, the XPD defense pistol bullet, introduced in 2013. I first had my eyes opened when firing these bullets at a steel plate target and recovering them, on the ground nearby, intact and expanded to .88” in the 9mm loading and .94” in the .45ACP. Forget shooting ballistic gelatin – how about a bullet that refuses to break up upon hitting steel at between 1,000 and 1,100 feet per second (fps)? Both the .45 and 9mm loads zipped right through a 16” block of ballistic gelatin last weekend, with the 9mm producing a 3/4” wide wound cavity while the .45ACP wound cavity was right at 1” wide. I was unable to recover and measure either bullet. I’ve been carrying this Barnes .45 load in my Lightweight Commander for about a year now.

Mike McNett has built Doubletap from a custom maker of 10mm ammunition to the sixth largest ammunition company in the country. He has hundreds of loadings in just about any caliber you can think of and produces many of his own components. His 90 grain bonded .380ACP loading produces outstanding penetration and expansion but his 77-grain 9mm copper hollowpoint is the one I want to tell you about. Not a +P load, Mike’s ammunition drives this lightweight bullet of his own design at an advertised velocity of 1,600 fps, which is vey fast for handgun ammunition. It averages 1444 fps in my short-barreled Glock 26 and 1460 fps in my compact Glock 19 and penetrates 13” of ballistic gelatin while expanding to about .65”. Incredibly, when fired in the 16” barrel of the Ruger Pistol Caliber Carbine this load averages 1926 fps and still penetrates to around 12” while, again, expanding to .65”. A side benefit is that this load is very mild shooting due to the lighter-than-normal bullet and it shoots very flat due to its high velocity. With complete confidence, I’ve been carrying this 9mm load in my Glock carry pistols and have the Ruger carbine stoked with 33 of these bad boys. 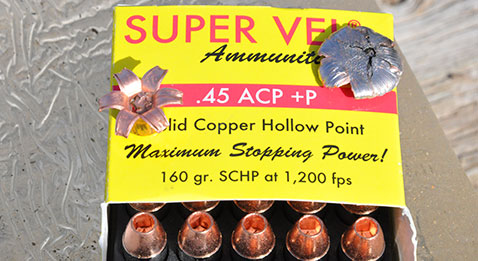 Old timers will remember those iconic yellow Super Vel ammunition boxes back in the 1970s when the company revolutionized the defensive ammunition market with their high velocity hollowpoints. Founded by Lee Juras the company eventually went away until resurrected by Cameron Hopkins. To the joy of defensive shooters, Super Vel is back! Another twist in the Super Vel story involves Peter Pi. He founded Cor Bon and designed the copper DPX (Deep Penetrating Expanding) bullet. This load became my preferred one in my carry 1911 pistols. Alas, in a long story not worth telling, Peter retired from Cor-Bon, chaos ensued, the company folded (I’m told it will be back in mid-2019) and Peter was persuaded to go to work for Super Vel due to “an offer I couldn’t refuse”. Now Peter busies himself producing very effective defensive ammunition, and especially to my interest, solid copper hollowpoints. His .45ACP load at about 1,200 fps penetrates about 11” of jell and expands consistently to .90” while making an impressive permanent wound channel. After hitting a steel plate this bullet stays intact and expands to around .92”. The 9mm load produces identical performance, with recovered bullets measuring 1” after smacking a steel plate. By the way, the petals on the expanded bullets are very sharp so be careful when digging them out of the ballistic goo, ask me how I know, and the bullets that hit the steel plates transfer all that energy into heat and are very hot when you try to pick them up…. ask me how I know.

Now I have a dilemma; all this ammunition is excellent. Should I switch over to the new Super Vel, keep doing what I’ve been doing or happily switch them around at will as available? It’s a nice problem to have and I would bet my life on any of these loads.

So there you have it, my favorite defense loads are solid copper hollowpoints. Your mileage may vary and everyone’s entitled to an opinion but I’m pretty comfortable with carrying these loads. And like I say, nobody wants to get shot with anything. 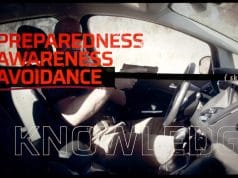 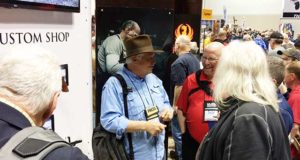