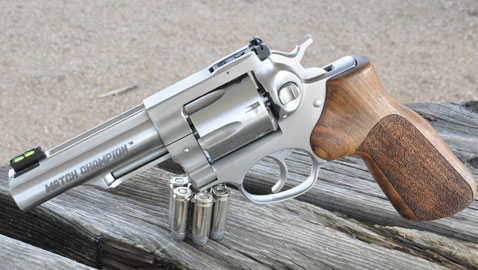 Who could have predicted the resurgence of interest in handguns chambered for the 10mm cartridge? Once almost dead and gone, the 10mm is now available in both pistols and revolvers and ammunition is plentiful. What happened?

Back in the Dark Ages Jeff Cooper proposed the 10mm as the answer to getting more power than the .45ACP in a semi-automatic pistol. He helped create the Bren 10 and gave it his endorsement, then the project fell flat on its face, as Dornaus and Dixon were unable to produce a reliable supply of pistols and magazines before going belly up. Colt produced a 1911 pistol in 10mm but it was plagued with stories of cracked frames. Finally, Glock came along with a 10mm pistol that worked and held up. In the meantime the FBI concluded the 10mm was the answer to the horrible shoot-out in Miami that wrecked an entire team of agents. Smith and Wesson produced a large, service sized pistol for the 10 that soon turned out to be difficult to shoot for some agents and was largely unsuitable for concealed carry. The FBI agents I knew at the time tended to leave the big Smith in the office or carry it in a briefcase…I never saw one in a concealment holster. This prompted the FBI to first reduce the power of the 10mm down to about .45ACP levels and then to seek a round that duplicated the performance but fit in a concealable 9mm size pistol. Enter the .40S&W cartridge, and most successfully, the Glock 22 and 23 pistols. 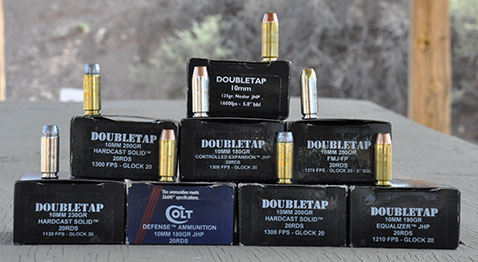 Out in the civilian world the 10mm had a dedicated cadre of fans who felt a little neglected. There were few pistols available for the 10 and ammunition power steadily declined to the point where most 10mm ammunition was running at about .40 S&W performance levels – more or less 950 feet per second (fps) for a 180 grain bullet. One such frustrated shooter was Mike McNett. A hand loader, he knew how to unlock the potential of the 10mm. Word of his ammunition started to get out and folks asked him to make some for them, thus leading to the creation of his company, Doubletap Ammunition. Today, McNett is churning out an incredible variety of high quality ammunition, designing proprietary bullets and loads and is best known for making high powered ammunition that gets the job done, especially in the 10mm. McNett’s efforts have led, in no small part, to the resurgence of interest in the 10mm cartridge.

Ruger jumped into the 10mm market with a 1911 pistol and, surprisingly, with a Super Redhawk that uses full moon clips to load the rimless 10mm cases. Being a big, heavy pistol suitable for hunting, I found it comfortable to shoot, even with the hottest of McNett’s hunting ammunition. Speaking of hunting ammunition, Mike makes a 200 grain, hard cast flat point bullet load that launches at 1300 feet per second. He tells me hunters have shot this load through Cape Buffalo and I have no reason to doubt his word.

So where were we? Oh, yes, the new Ruger GP100 Match Champion in 10mm. A six shot revolver that loads with clips, the Match Champion is an improved version of Ruger’s venerable .357 Magnum GP100, a revolver with a reputation for being very strong yet easy to carry. The barrel is a touch over 4 inches long, the revolver weighs 37 ounces empty and my sample has a nice trigger. The double action is smooth and I’m guessing it runs around 13 pounds, as my Lyman trigger gizmo gives out at 12 pounds. The single action trigger has a tiny bit of creep before breaking at just over 4 pounds and if my experience is any example, I expect the trigger will improve a bit with use and settle in at a bit under 4 pounds.

Although I have some 10mm ammo at hand from Hornady and Federal I chose to test the GP100 with seven of McNett’s 10mm loads:

While often compared to the .41 Magnum the 10mm is 200-300 feet per second slower when comparing similar bullet weights. But, and this is a big but, the 10mm can be used in both semi-auto pistols as well as revolvers and loads like McNett’s 200 grain hard cast solid provide all the penetration you might need without the extra blast and recoil of a big Magnum cartridge. And that is he real secret, the sweet spot, fans of the 10mm have come to appreciate. By the way, you can shoot .40S&W ammunition in the GP100 so if you have a supply of it lying about it makes great practice or defensive ammo for use in the revolver.

Shooting these loads in the GP100 got my attention. Not the enthusiast I once was of hard recoiling revolvers due to arthritis in my fingers, I chickened out and wore a shooting glove that offers a little padding. Shooting a steel plate at 25 yards, offhand, both double and single action, I had no trouble getting hit after hit. The green fiber optic front sight is easy to see and once I got the rear sight adjusted I couldn’t miss. Speaking of sights, this GP100 follows a pattern I have seen with Ruger revolvers where I have to adjust the rear sight all the way down and use a 6 o’clock hold (target perched atop the front sight) to get hits. Did someone at Ruger decide the world needs to shoot a target hold or am I missing something? I wish this could get sorted out, as it frustrates me no end. By the way, Ruger isn’t the only company doing this; I’m seeing a trend in many pistols where dots and fiber optic front sights have to be buried in the rear sight notch rather than obtaining a proper front sight/rear sight relationship. 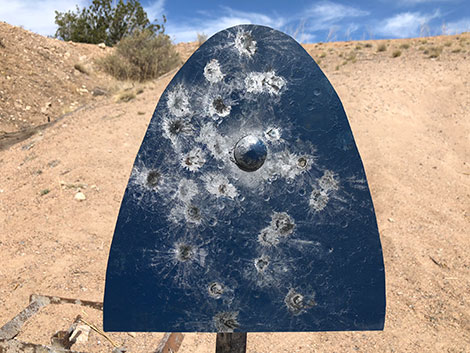 If you’re after an easy packing revolver that offers all the power you could need this Match Champion will fill the bill and Mike McNett can provide 10mm ammunition to meet any need. The 10mm is back in a big way and that’s a good thing for hand gunners.