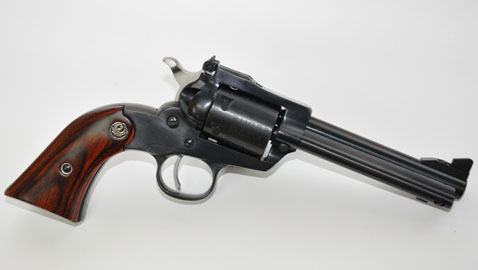 In the days of my youth, my playmates and I wanted to be cowboys. We idolized the stars of westerns and emulated their gun handling skills with our toy guns. Not the least of these skills 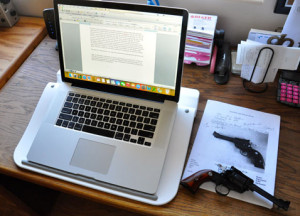 was the fast draw with a single action revolver, a skill I learned and practiced intensely with a Mattel Fanner 50 toy sixgun. Imagine my joy a few years later when I strapped on a cowboy style gun rig with a Ruger Bearcat .22 revolver in the holster. That early Bearcat got away from me and I’ve missed it ever since, but now I have a new Bearcat lying on the desk close at hand while I write.

The Bearcat has been a part of the Ruger lineup since 1958 when it was introduced as a small, alloy framed, fixed sight revolver weighing around 17 ounces. This model was replaced by a steel frame version in 1971 with production ceasing in 1974.  Fans of the Bearcat rejoiced in 1994 when Ruger brought the little pistol back as the New Bearcat with a steel frame and transfer bar safety system allowing the safe carrying of six rounds in the cylinder but still retaining the petite size and roll mark engraving on the cylinder of a cougar and a bear and the words Ruger Bearcat.

The latest version of the Bearcat is available in blued or stainless steel with an adjustable rear sight made as a limited edition for firearms distributor Lipseys’s. Like the New Bearcat, this petite revolver has a small steel frame and 4.2 inch barrel but the frame is a flat top design to accommodate the adjustable rear sight. With the front sight sitting atop a ramp, the new revolver looks like a mini version of the larger Single Six .22 caliber revolvers. The Bearcat cylinder can be rotated for loading and unloading when the hammer is drawn back to half cock. I think this is a feature unique to the Bearcat, as other Ruger single action revolvers I’m familiar with require opening the loading gate to rotate the cylinder. 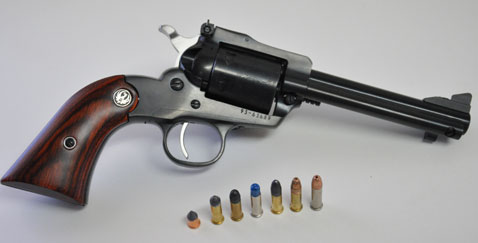 The Bearcat is chambered for .22 Long Rifle ammunition and will shoot any .22 ammo including CB caps and shot shells or .22 Short and .22 Long ammo. Unlike semi-auto pistols in .22 caliber that are designed for one specific type of ammunition, .22 revolvers can shoot the full range of .22 ammunition. This versatility makes the Bearcat well suited to applications ranging from indoor and outdoor target shooting, to plinking, pest and varmint control and small game hunting. Due to the adjustable rear sight the little revolver can be zeroed for whatever load you might want to shoot and this is a distinct advantage over the fixed sight versions. My sample Bearcat is one of a handful of very early production models sent out to writers and I 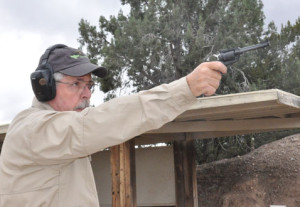 discovered the rear sight couldn’t be lowered sufficiently to zero the gun without running into the hammer. I understand this problem was fixed before revolvers were shipped to Lipsey’s so it shouldn’t be an issue with any of the ones being sold.

Other than the sight problem the Bearcat I have at hand is a great shooting little revolver. The trigger breaks crisply at four pounds, the sight picture is excellent and the little revolver shoots more accurately than I can appreciate. I didn’t go to the trouble of bench resting the Bearcat and shooting it for group because it’s just too much fun to shoot and tediously recording group sizes seems counterproductive to shooting for fun. As you might expect, the Bearcat fired every load I tried without a single malfunction or failure of any kind. Even though it is the smallest single action revolver in the Ruger lineup the Bearcat is solid, well made and feels like a serious revolver. 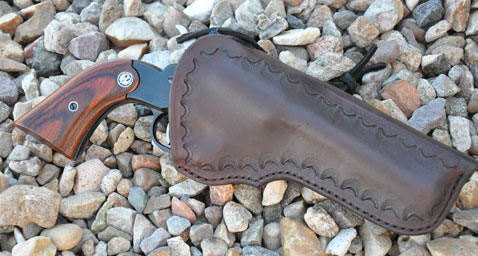 A single action revolver deserves a proper Western holster so I asked the good folks at Simply Rugged Holsters to make me a suitable holster for the little Bearcat. The Cattleman holster they produced is reminiscent of Old West styling, is made of top grade leather and has scalloped border stamping. It is a very well made, attractive and functional holster that compliments the spirit of the Bearcat.

Much as the Bearcat thrilled me those many years ago, I rather imagine there are many youngsters who would love to be introduced to shooting with a revolver that evokes the cowboy spirit. The little Bearcat is a great revolver for young and old alike and will do anything you might expect of a .22 revolver. If you haven’t held a Bearcat in your hand I urge you to mosey on down to your local gun emporium check one out. I would be willing to bet you’re going to have a hard time putting it down and it will likely go home with you. 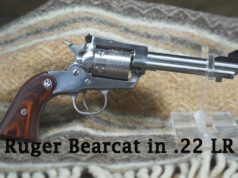 Lipsey’s Gun of the Month: Ruger Bearcat in .22 LR 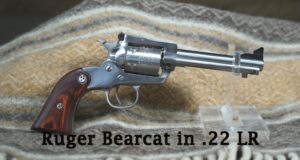 Lipsey’s Gun of the Month: Ruger Bearcat in .22 LR

Flying Dragon Ltd - April 16, 2020 0
Lipsey's has outdone themselves with this Gun of the Month. It's a .22 caliber Ruger Bearcat, the smallest of the Ruger Single Action Revolvers. But this one has a couple of interesting twists...