[NOTE: NEXT WEEK’S TRIGGERED WILL FEATURE A FULL VIDEO REPORT ON THE TAURUS GX4. BE SURE TO TUNE IN!]

How long have I been sunk in Mini-9 Universe?

I’ll give you a hint. This morning I reached into my gun safe and hauled out what i initially thought was a huge pistol…gigantic, even. When I looked at it closer, it was a G19.

I can remember when we all thought a G9 was small!

The gun I was looking for was the Taurus GX4, that company’s leap forward, or maybe leap over would be more correct, into the Mini-9 market. The 10-shot 9mm GX4 is Taurus’ largely successful attempt to leapfrog their own previous subcompacts and drop a new gun right smack in the center of the blazing hot micro-9mm market.

First, let me lay out the specs for the GX4:

What bumps the GX4 up in my opinion (and please keep in mind that Taurus is a sponsor) is an intense attention to details,. As I’ve been talking about on both the blog and the MBTV ON THE RADIO podcast, the Micro-9 market is an amazing thing. The market came into being because concealed carry is the hands-down primary driver for the Gun Culture. Everything else takes second place.

A second point is that the new concealed carriers absolutely refused to buy into the “pick your carry gun; then build your lifestyle around it” old saw that has hanged over CCW since its earliest days. The new generation of concealed carrier said, rather, we dress the way we dress, so give us a gun that we can carry without purchasing a large number of Hawaiian shirts.

Taurus has been in the forefront of small semiautos for years. In fact, we did a video on the new G3c recently and were very positive about the gun. But Taurus understood that in a world of Sig 365s, SA Hellcats, Shield Pluses, FN503s, Ruger MAX9s, Kimber Micro-9s, Kel-Tecs,and I’m sure a couple I’ve forgotten, they were behind the curve.

Well, they’re behind the curve no longer. The GX4 is a collection of best practices in the Mini-9 field. Let me start with the styling. Taurus has always had a rep as a bit blocky, but the GX4 is a slick-looking little gun. The grip especially is a standout. Between the one-inch width (don’t get me started the importance of narrow guns!) and the stippled panels, the GX4 is easy to hang on to. This is a very important feature in a Mini-9mm, because they are still 9mms and when hotted up with self-defense ammunition, they will bite. With the shorter grip panel (you get 2 with the gun) my pinkie has some hold on the grip. Enough of a hold that I can quickly dump 5 rounds of my 115-gr self-defense ammo (which I just did about 5 minutes ago) without losing that grip, which is a neat trick with a Mini-9. Having tried them all, I would put the stippling as best of class…slightly more aggressive than my current EDC, the Sig 365XL, and the Hellcat and Shield, but less aggressive that the Taurus G3c, which gives you a good handhold but, I aspect, may raise a bit of havoc with clothing. I would also like to point out that as a competition shooter I default to sharper stifling/checkering, and that does influence my opinion. 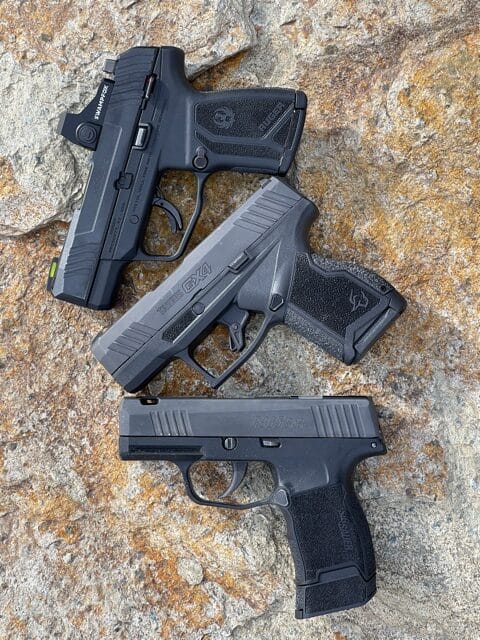 The trigger is superb…I would say the best of the Mini-9 class. Period. It’s a flat-faced trigger with just a little take-up followed by a very crisp 6-pound break on my Lyman gauge. It resets quick like bunny…I know…technical terminology.

Another small touch that I really like is the stifling on the frame just forward of the trigger, what Taurus calls a “Signature Indexing and Recoil Management Pad.” I started adding this little pad to my Glocks for a couple of reasons — in a foreword grip as most of us are using, the weak hand thumb can index of that bit of stippling. And when I take my finger off the trigger, my trigger finger finds a happy home on that stippled pad. It’s a small thing, but as I mentioned above when you’re playing in a market this big and this hot, details matter…a lot.

There is no manual safety, and the frame is well enough designed that the slide release button is both easily accessible but surrounded by enough of a “wall” to keep it from snagging. There’s no takedown lever, but it is easily accomplished by turning the takedown screw on the  right-hand side of the frame.

The serrations on the slide, front and rear, are, again, exactly right. Recoil rod is steel, which is often aftermarket accessory for Mini-9s. The barrel has a DLC coating and the operating controls are Teflon-coated,  once again, upgrade touches.

A word about the sights — they’re fine, but you probably won’t like them. That’s okay because the rear dovetail is a “common design,” and the front sight removes with a screw much like a, ahem, Glock. The GX4 is NOT cut for a red dot sight, although there are photos on Brazilian gun websites showing a GX4 with a red dot (the GX4 is built at the Bainbridge, GA, factory, BTW). The MSRP of the GX4 is $392.42. If it follows the pricing on the G3c, you’ll see a version cut for a red dot for a bit more pretty soon down the line.

My version came with the 10-round magazines, designated for limited capacity states. Standard capacity is 11 + 1 and 13 + 1. The mags themselves are excellent. I’ve run both crummy old ball and my self-defense 115-gr loads through the gun with no issue, but over the next week I’m going to be laughing a great number of rounds through this little gun.

If I could sum it up in one word, impressive. I look forward to shooting it a lot more. 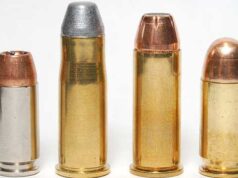 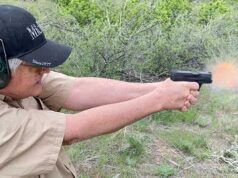 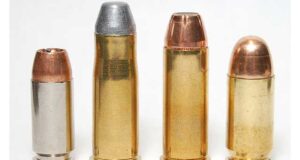