The short-barreled revolver is American as apple pie and Fourth of July fireworks. Once the symbol of police detectives and off duty police officers, the snub-nosed revolver is still carried as a police back-up gun and as a primary means of self defense by countless citizens. I would guess there are more  .38 Special snubbies in dresser drawers throughout the land than any other handgun of any type or caliber. I have it on good authority that manufacturers can’t keep up with demand for small revolvers despite producing so many you might be amazed at the numbers being shipped every day.

When Ruger set out to create a 2” (actually 1 7/8”) barreled revolver suitable for defensive carry they started with a blank page. The Light Compact Revolver (LCR) that resulted was both evolutionary, because it solved many of the problems common to snubbies, and revolutionary, because it set a new standard in design. Introduced in 2009, the LCR was an instant success. Using an all-new friction reducing cam action, Ruger engineers created a smooth, lightweight trigger pull that doesn’t need the attention of a gunsmith to make it manageable. They put a serrated ramp front sight on the LCR and pinned it to the barrel so it could be easily changed to colored, fiber optic, or night sights, or replaced altogether if damaged. To make the LCR lightweight yet strong, Ruger used a combination of polymer, aluminum and stainless steel in the construction with strong materials where they need to be strong – the stainless steel cylinder and barrel insert – and lightweight polymers in the fire control housing where absolute strength isn’t necessary. Fully loaded the revolver weighs less than a pound, making it easy to carry and conceal. 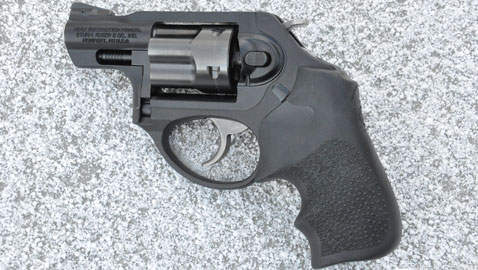 There’s only so much you can do to overcome physics but the LCR incorporates several features that make it much more comfortable to shoot than other snubbies of comparable weight. The hand filling and cushioning Hogue Tamer rubber grips have a lot to do with this and because the revolver seems to sit lower in the hand the recoil is directed back into the grips and the palm of the hand. Unlike some snubbies, the trigger guard of the LCR doesn’t smack me painfully in the knuckle when I shoot powerful ammunition. 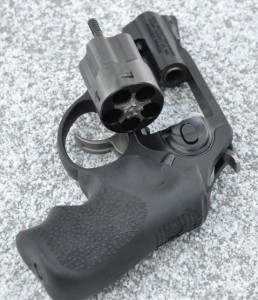 Ever since gunfighter John Wesley Hardin’s capture when he caught the hammer of his revolver on his suspenders as he drew his pistol savvy gunmen have taken steps to avoid similar embarrassment. One way is to cut off the hammer spur, another is to shroud the hammer and yet another is to design a revolver without an exposed hammer. This makes the revolver double action only since it can’t be cocked for single action shooting and it’s the method Ruger used on the LCR. As in most things, there are advantages and disadvantages to this system. The revolver being less likely to snag on clothing as it’s presented from concealment is an advantage, while a double action only trigger system can be harder to manage. Although I don’t have difficulty shooting the LCR – and I have seen trained shooters do remarkable shooting with them – I’m also aware that a lot of shooters would shoot more accurately and would have less difficulty working the trigger if the hammer could be cocked for single action shooting, and that brings us to the new LCRx, a LCR with an exposed hammer that can be fired in either the double action or single action modes.

The LCRx is chambered in .38 Special +P so we should talk a little about that. The +P designation for ammunition means that it creates higher than standard pressures when fired. Higher pressure translates to higher velocities. The +P designation on the LCRx means it can be fired safely with any standard .38 Special ammunition including the higher pressure stuff designated as +P. That’s a good thing, as there is an amazing variety of .38 Special ammunition to choose from. For this test I concentrated on shooting the LCRx with Federal 148 grain .38 Special Match Wadcutter ammunition and a load specifically designed for defensive use, the Hornady 125 grain XTP. Although it’s designed for target shooting, wadcutter ammunition is surprisingly effective as defensive ammunition and it’s mild recoil encourages practice. On the other hand, the Hornady XTP load is serious defensive ammunition with a bullet optimized for penetration and expansion at .38 Special velocities.

At the range I found the LCRx was reasonably comfortable to shoot and 100% reliable. Drawing from a Galco Stinger belt holster I fired the LCRx in the double action trigger mode for center of mass hits from close to moderate ranges and thumb cocked the hammer with my offhand thumb for precision shooting. I fired fast pairs to center of mass in the double action mode then transitioned to single action for headshots. I also tried single and double action hits on a 10 inch steel plate at 25 yards and, to my surprise, made every one of them. When shooting small revolvers I like to use a two handed grip with my support side thumb locked down over my strong side thumb. This makes it easy to cock the hammer with my left hand thumb for single action shooting and keeps my thumb away from the front of the cylinder. A word of caution here: If you’re accustomed to using a thumbs forward grip on a semi-automatic pistol you want to be very careful about doing this with a small revolver. Because of their design, all revolvers allow gas to escape from the front of the cylinder when they’re fired. Letting this jet of hot gas massage your delicate digits is a bad thing and I suggest you avoid the experience.

Ruger’s website is full of information on the entire LCR line of revolvers. If you want to look up specifications, compare models or watch videos on safety and gun cleaning it’s all there. I recommend you spend some time at www.ruger.com.

Small pistols designed for comfortable concealed carry share two opposing characteristics, those being light weight and power. Achieving a usable balance of weight and power is the real trick and I think Ruger has done a good job of pulling this off. The LCRx is both lightweight and powerful and as easy to shoot well as a small revolver is likely to be. It rides comfortably on my hip and I know I can use it to make hits at reasonable ranges. That’s what I call comforting.