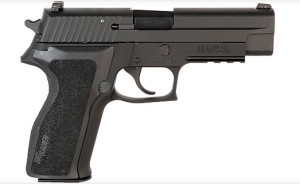 After 73 years as the United States military service pistol, the 1911 was de-throned in 1984 and replaced by the Beretta 92F, now known as the M9. The only other pistol to satisfactorily complete the exhaustive XM9 Service Pistol Trials was the brand new Sig P226. The final decision on which pistol to choose came down to price. The SIG was actually less expensive than the Beretta but the Sig package price for magazines and spare parts cost more so the government chose the Beretta. Well, most of the government. The U.S. Navy SEALs decided they preferred the 226 and adopted it as the Navy MK 25. The SEALs are still using the MK 25 and it has been picked as a service weapon by a large number of federal, state and local law enforcement agencies.

The P226 must be a popular pistol, as it is currently available in at least 18 variants from Sig-Sauer. Over the years the pistol has evolved with a number of features but it still remains the archetypical double action (DA) / single action (SA) high capacity pistol. Although my sample is chambered in 9mm, the 226 is also available these days in .357 SIG and .40 S&W calibers. The 226 is a big pistol. After all, it was designed as a military service pistol. It is advertised as weighing 34 ounces empty but my sample weighs 31.6 ounces with the empty magazine in place and 38.5 ounces fully loaded with 15 rounds of 124gr. Federal Hydra-Shoks in the magazine and one in the chamber. The sights are fixed – my pistol has a two dot rear sight and a high visibility green fiber optic front sight.

The DA/SA trigger is the heart of the Sig system. The pistol is hammer cocked with the first pull of the trigger and subsequent shots are fired in SA from the Short Reset Trigger (SRT). De-cocking the pistol by depressing the frame mounted de-cocker safely drops the hammer and returns the pistol to the DA configuration. The pistol is designed to be holstered and carried with the hammer de-cocked and can be carried this way in perfect safety. Failing to de-cock, followed by slamming the pistol into the holster is ill-advised (see my article on the Evils of Speed Holstering).

According to my Lyman electronic trigger pull gizmo, the DA trigger pull on my sample averages 9 pounds, 2 ounces. The SA trigger averages 4 pounds, 3 ounces. Along with the SRT, meaning the trigger moves forward only slightly before re-setting, this is a very good DA/SA trigger. The earliest DA/SA trigger systems were mostly unmanageable and that situation was pretty much the standard for DA/SA triggers for decades. I’m happy to report Sig has gotten it right and produced a trigger anyone should be able to shoot well with training and practice. I’m told my sample with the SRT trigger and fiber optic front sight is the hot setup among the current SEALs, in case you were wondering about that.

Other features of the P226 include a standard mil-spec rail below the dust cover for accessories like lights and lasers, a hard anodized aluminum alloy frame and stainless steel slide blackened with a process called Nitron. The grips on my pistol are one piece hard plastic in a pebbled finish. There are no screws and the grips apparently snap onto the frame. Removing them isn’t explained in the instruction manual but I assume they can be pried off. For those in need of a lanyard (SEALs) there is an attachment point at the bottom rear of the grips.

Takedown for field stripping and cleaning is about as easy as it can get: First, with the magazine removed and the chamber unloaded, lock the slide to the rear. After turning the takedown lever down, depress the slide stop while controlling the slide as it comes forward off the frame. Lift out the recoil spring and barrel in the usual manner and you’re done. Re-assembly is, as they say, in reverse order. As a function check pull the slide to the rear and let it go forward under spring pressure. If it falls off the frame you did something wrong, like failing to turn the takedown lever back up.

How Does It Shoot?
My experience with Sigs in the past has shown them to be completely reliable and my sample P226 was no exception. It easily consumed the Federal 124 grain Hydra-Shoks I fed it while shooting through a series of drills from 3 yards to 25 yards. I liked the green fiber optic front sight, as it really drew my attention to where it needed to be focused, that being on the front sight. While shooting I fired two shot strings, the first shot being DA and the second SA after the trigger reset. Interestingly, I experienced more difficulty with the SA than the DA trigger pull. Being an old revolver shooter I am accustomed to stroking through a DA trigger while maintaining the proper sight picture. Following the DA shot with one from SA was more difficult than I expected, as I was not used to how the SRT trigger was breaking and this caused me to “jump” on the lighter trigger. Shooting these triggers well demands plenty of practice, especially if you are used to pistols like 1911s and Glocks.

Nitpicks
My only real complaint about the P226 and the Sigs in general relates to the inability of the user to clean out the firing pin channel without armorer’s training and spare parts. At one point during my Border Patrol career I was running the range when a number of the optional carry Sig 220s some agents were using began to experience light primer strikes and misfires. As it turns out, the pistols had been in the field for from one to two years of hard use and enough crud had gotten into the firing pin channels to retard the firing pins. For most folks this will not be a problem, and for departments and military organizations a preventive maintenance program handled by trained armorers should take care of this issue.

Other than that, I like the P226. It is very well made, accurate and reliable. If it’s good enough for Navy SEALs it should get the job done for the rest of us. 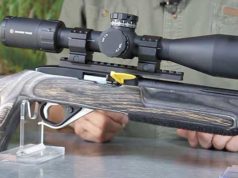 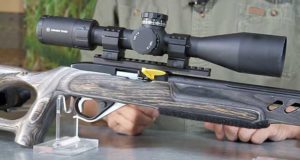 Michael Bane - August 27, 2019 0
Michael Bane shows off his long range .22 rifle with the 4-20 Crimson Trace scope. He also brings you back to the OSG Roundtable to talk about the Stoeger STR-9.