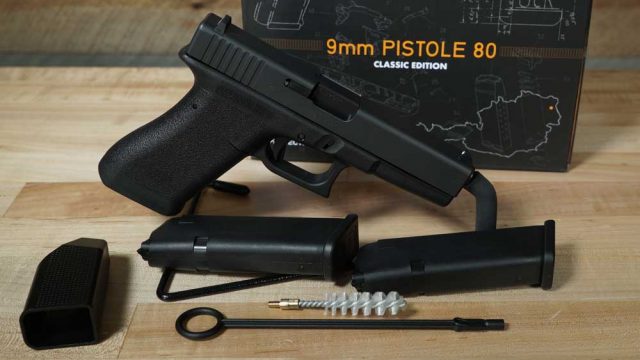 TRIGGERED VIDEO ON THE P80 NEXT WEEK!

So what if you had a chance to buy the uber-Glock?

Not a Gen 1 commercial G17, but a Pistole P80, the gun adopted by the Austrian Army in 1982 that launched Gaston Glock’s plastic fantastic pistol into the stratosphere?

I’ve seen one… in a glass case.

…that is, until now, thanks to our friends at Lipsey’s, I have one… in my hands.

Amazingly, Lipsey’s convinced the notoriously stodgy Glock company to create a limited number of pistols made to the original Austrian Army specifications. Let me quickly run down those specs:

My understanding is that the original P80s did not have the Glock “staple” on the polymer frame that carries the serial number, because most of the rest of the world has a different definitions of which parts are the “firearm” part of the firearm. In Austria, the slide and the breech block of the barrel carried the serial number and, as such, the P80 was not eligible to be exported into the United States.

So some of you are thinking, “Why would I want one of these?” On the other hand, there are Glock collectors reading this who are actually weeping with joy.

I know I used to make fun of Glock collectors…until I looked in my safe? Where did all those things come from, I thought?

Each generation of Glocks does, in fact, represent a response to the largely American commercial market. Gen 2 and the smaller G19 came pretty quickly, in 1988, followed by the “workhorse,” the Gen 3, in 1995 (or 1998, take your pick). I chose the Gen 3 G19s as my go-to handgun for all the same reasons that made the Glock such a sensation in 1986…relatively inexpensive, easy to work on, cheap parts, accurate, reliable as dirt. It is still my go-to handgun.

Gen 4 came in 2010 and was a bit slow to get off the ground because of the huge success of the Gen 3s… I ran a Gen 3 G19 in the Rob Leatham Intermediate class I attended recently. I pumped maybe 1200 rounds through it in 3 days on a hot, dusty range. It ran like a top.

The current 5th Generation Glocks, rolled out in 2017, have maybe more changes that all the other generations put together, plus Glock has been going with the occasional “mix and match” configurations, such as the G19s, a G19 slide on a G17 frame, more or less, with a lanyard ring and in a fetching FDE-ish color, and the G45, the same, in basic black. I have a G19x that is an exceptionally good gun.

I know there’s a lot of you out there who were born AG, After Glock, or maybe you weren’t into guns and shooting enough to understand what a world shaker the first Glocks were.

Oddly enough, those world shakers came not from a firearms designer or even a team of military engineers, but a guy who got his start running a radiator shop in Austria. To make a little extra money, Glock got a secondhand metal press from Russia and began making metal doodads, including brass fittings and curtain rods.

Eventually, curtain rods didn’t do it, so Glock began making knives. Not just knives, but pretty good knives, knives good enough to attract the interest of the Austrian Ministry of Defense. From curtain rods, Glock shifted most of his production to field knives and bayonets for the Austrian military.

He also made a purchase that would, quite literally change his life and eventually the world — he bought a new machine to mold polymer handles for his knives, and over the next 12 months learned a whole lot about molding plastic.

In 1980, Gaston Glock happened to walk down a very propitious hallway in the Austrian Ministry of Defense, where he overheard two military men discussing the need for a new military handgun. Remember, almost all European militaries were still running off World War Two “leftovers” like the excellent but dated Walther P-38. Somewhat amazingly, since Glock literally knew nothing about weapons design, he asked the men whether anyone could submit a design for a new military pistol.

They laughed at him, but he persisted…how hard could it be, he reportedly said. I’m sure by that point John Browning was spinning in his grave. A year later on April 30, 1981, he filed his first patent for a firearm, and since it was his 17th invention, he called it the G17, which would arguably become the most successful handgun ever made.

Glock’s genius, which he later claimed was because of his ignorance of firearms design, was to start with a blank sheet of paper, his knowledge of molding plastic and a firm commitment to manufacturability, if you will. While manufacturing had by the 1980s gone through a revolution, handguns had not. Most of the predominant designs could trace their lineages back to the 19th Century, when handwork was cheap and machine work expensive. Handguns were fitted, by humans, slowly… and expensively in the modern environment.

Contrary to what a lot of people believe, the G17 was not the first polymer-framed handgun. The strange and clunky Heckler & Koch Volkspistole, literally the “People’s Pistol” and abbreviated as VP70, was released in 1970 as both a semiautomatic pistol and a select-fire machine pistol. Despite its Buck Roger-ish looks, the VP70 with its staggeringly bad trigger pull never caught on. The first time I shot one, I thought it would take me and 2 friends to pull the trigger, Instead of creating a revolution, the VP70 ended up a footnote in arms history.

Glock designed the metal parts of the G17 to be manufactured on the new CNC machines and, in keeping with modern manufacturing techniques, to keep the number of parts to a minimum and very few fitted tolerances… essentially, exactly the opposite of how guns had been made for more than a century. While the 1911 had 49 parts (and we can argue about that) and had to have the barrel and trigger carefully fitted, the G17 had 36 parts and could be assembled by a reasonably intelligent poodle… and it would work…. and work… and work.

A side note…for an episode of SHOOTING GALLERY many years ago we went to Georgia for the biggest Glock Sport Shooting Association match in the country. My friend at Glock told me not to even bring a gun; they’d provide one for me. When I got there my friend opened the trunk of his car and said, “There’s your gun.” Actually, there were my gun parts, all 36 of them, big boxes of Glock parts. So we built a Glock from the frame up, just grabbing random parts out of the boxes, and it ran flawlessly throughout the match. Try that with a 1911… or a lot of other guns.

The G17 was light, held 17 rounds of 9mm and featured his unique “safety” on the trigger, a striker rather than a hammer, a slide machined from a solid block of steel and its signature polymer frame. On November 5, 1982, the Austrian military announced that the G17 had sailed through the military trials with flying colors and would become the new handgun for the Austrian Army. It’s military designation was Glock P80.

It’s hard to explain what a revelation the G17 was when it hit American shores in 1986 (although there weren’t many “in the wild” until 1988). From experience, it was spoken of in awe. In mid-1986  I got the opportunity to drive from my home in Tampa to Jacksonville, where we’d be able to examine and shoot 2 G17s, among the first in the country. It took moving the world and several minor planets to pull off the meeting… at an indoor range after hours… knock twice… “Joe sent me”… it would have been easier to buy a surface-to-air missile. Speaking as a died-in-the-wool 1911 fan and a competition shooter, I wasn’t quite sure what I thought about the plastic gun. I loved the weight, loved the 17 rounds, but the trigger felt like a Slinky bouncing down the stairs, and the weird Glock polygonal barrel wouldn’t shoot lead bullets (which, to be honest, is all I could afford at the time).

And the price was one-fifth of what I had in my Wilson Combat 1911 competition pistol. I was pretty sure that was one of the Seven Signs of the Apocalypse. Everybody knew the only way to get a working gun that didn’t have six holes in that cylinder thing cost at least a grand, plus another grand to the gunsmith to undo every thing the factory did. What if, the Glock rep said, you could buy a cheap gun that worked right out of the box, and kept on working until the Ole Sol went supernova? Harrumph, I said.

I also grudgingly thought the amazing plastic Glocks represented the future of firearms.

I was probably wrong about the “harrumph,” but I was right about the future.

In one of her silent films, “America’s Sweetheart” Mary Pickford was given a brand new doll. The test panel that came next said, “Love it quick; you ain’t gonna have it long.” The Lipsey’s P80 is a limited edition, and Lipsey’s other Glock exclusives, including the superb line of Larry Vickers spec’ed Glocks — maybe the best out-of-the-box Glocks ever made, in my opinion — have disappeared in hours, not weeks. 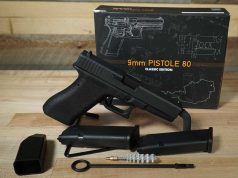 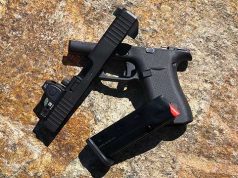 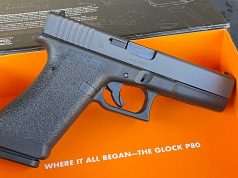 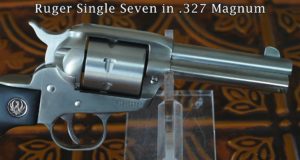 Libsey’s Gun of the Month: Ruger Single Seven in .327 Magnum