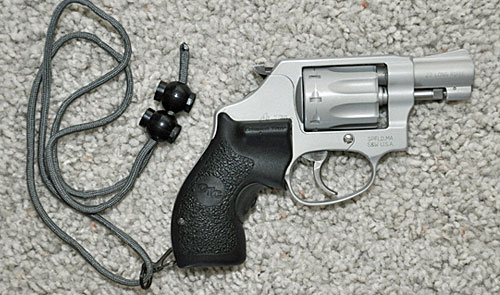 So, have you ever been in the shower when you wondered what you would do if someone were to break into the house?  Did you see the movie “Psycho”? You know, the shower scene?

A small, lightweight, waterproof pistol hanging around your neck could be just the thing to make you breathe a little easier during those vulnerable, naked moments. Especially suggested for police officers and other paranoid personalities, get your Gun On A Rope now.

Okay, seriously, lanyards aren’t a bad thing on pistols and can be very useful in circumstances where you might not want to be separated from your gun.  Just make sure the lanyard has break-away features in case you need to get loose. To paraphrase my mentor, Jeff Cooper, if your defensive firearm isn’t within reach, right now, you might want to ponder that a bit and make some adjustments to your defensive strategy.  A lanyard could be a part of that strategy.

The Evils Of Speed Holstering

Ed Head - September 1, 2009 1
Where has the time gone?  It seems as though we just started the year, and here it is September already.  Here at Gunsite we’re...